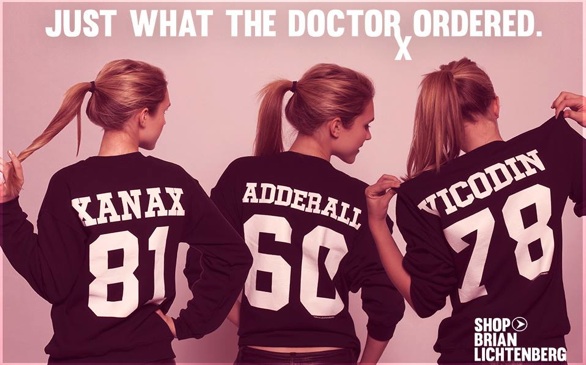 According to TMZ, popular Los Angeles clothing boutique Kitson might be facing legal charges for selling football jersey-like T-shirts that have the names of popular drugs (Xanax, Adderall and Vicodin, for example) emblazoned on the back. TMZ reports that a Xanax rep told the publication that it is considering legal action.

Since debuting the $58 T-shirts ($98 for the sweatshirt), Kitson has been receiving very harsh criticism from consumers, drug advocates and even celebrities. Actress Kristen Johnston ("3rd Rock from the Sun") tweeted:

With many people dying every day due to drug abuse and because of the increasing trend of young people (especially college students) abusing prescription drugs such as Adderall, critics are claiming the shirts are insensitive and irresponsible. One Facebook commenter wrote on the Kitson's photo of the shirts, "OUTRAGEOUS AND WRONG! Stop glorifying drug use!" Other Facebook users have even declared to boycott the boutique.

However, Kitson has stated that it will continue to sell the shirts. The designer of the shirts, Brian Lichtenberg, said the shirts are a "parody to pop culture" in a statement to ABC News. Director of Stores for Kitson, Mark Peters, also had a few words to say in the shirts' defense:

"Ultimately it’s freedom of speech … And it’s fashion and there’s a fun part of it, and it’s parody and people can wear it and say what they want on their shirts."

Blog
What qualifies as 'cheugy' in the Northwest? Generation Z weighs in
921 views