Taste of Mexico Dishes Up Authentic Mexican Cuisine for L.A. - See below for Special Discount Offer 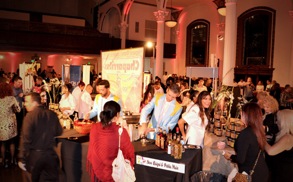 Living in Southern California, we have access to a lot of great cuisine, especially Mexican fare. Tacos, burritos, enchiladas, moles – we have an unlimited number of choices to choose from when we need to satisfy that intense Mexican food craving.

To satisfy that craving this fall, look no further than the 3rd Annual The Taste of Mexico, a tasty event that will attract Angelenos, food critics and enthusiasts at LA Plaza de Cultura y Artes on Friday, Oct. 11 from 5 p.m. to 11 p.m.

In its third year, The Taste of Mexico continues to bring authentic Mexican dishes for us to try. Paola Briseño González, the creative coordinator for the event, said that one of The Taste of Mexico’s goals is to show people that Mexican food is not “cheap” and deserves to be set at the same level as French cuisine, for example.

Consider this question: Should we have to pay $30 for an authentic Mexican dish? The answer is “yes,” and by sampling a few of the restaurants' dishes at this event, you will understand why.

“We want to elevate what people think of Mexican cuisine,” said Briseño González. “The Taste of Mexico is a platform for [the restaurants] to showcase what they do.”

The restaurants she speaks of are the best of the best when it comes to Mexican food in SoCal. The event’s four flagship restaurants that created The Taste of Mexico Association (FRIDA Mexican Cuisine, La Casita Mexicana, Guelaguetza Restaurant and La Monarca Bakery) will promote, enhance and embody authentic ingredients, flavors and traditions of Mexico’s cuisine. The four founding members are Mexico natives, follow traditional Mexican recipes and have chefs from various Mexico regions.

These four founders won’t be the only restaurants in attendance, however; the event is open to any Mexican restaurant, and Briseño González says The Taste of Mexico always chooses restaurants that are leaders in Mexican cuisine, have good health grades and more. “These restaurants and founders are excellent and have the best reputations,” she said. Other restaurants participating at this year’s event include Mexikosher, Nevera Juice Bar, Loteria Grill, Yuca’s Restaurant, La Tiendita Mexicana, Cacao Mexicatessen and many more.

As mentioned earlier, Angelenos are no strangers to popular Mexico dishes such as tacos, burritos, enchiladas and moles. What may be unfamiliar to some is the difference in ingredients these dishes contain from region to region in Mexico. Briseño González explained that different Mexico regions boast different ingredients, and The Taste of Mexico will demonstrate this fact.

“People will be surprised by the variation,” she said, “and the use of different ingredients: different jalapenos, chilies, etc. It’s a good display of all of us, a difference of regional cuisine.”

Briseño González further explained that in border Mexican states, for example, people use flour tortillas. However, in central Mexico, it’s all about the corn tortillas. And it makes sense – wheat and corn grow abundantly in certain regions. Look forward to picking up little interesting facts about Mexican cuisine such as this at The Taste of Mexico.

Attendees will not only learn about Mexican cuisine and ingredients at The Taste of Mexico; for those who are over 21 and want to splurge on the VIP ticket, get ready to experience tequila outside of Patrón and Jose Cuervo shots.

The ultra-premium tequila and craft mezcal tasting is an educational experience where you’ll learn about some of the best tequila and mezcal there is. “It’s about learning the different ways they’re grown,” said Briseño González.

Similar to the way Mexican ingredients vary from region to region, so does tequila. “Some of them are low-land (they’re peppery) and high-land (it’s smoother). It’s just like wine, “ said Briseño González. “I don’t think people really know about that. “

Through this tasting, you will also find out what tequila or mezcal you enjoy with certain dishes.

Lastly, the event offers up great live entertainment that revolves around music. Briseño González said that they are currently working on the lineup right now, but we can expect mariachi, a DJ and more.

“We’ll have just lots of different styles of music,” she said. “There will be music for everyone.”

The 3rd Annual The Taste of Mexico event promises to be a delight for your taste buds. Creating an authentic Mexican atmosphere with regional fare, tequila and mezcal, and live entertainment, attendees will surely find themselves asking for seconds.