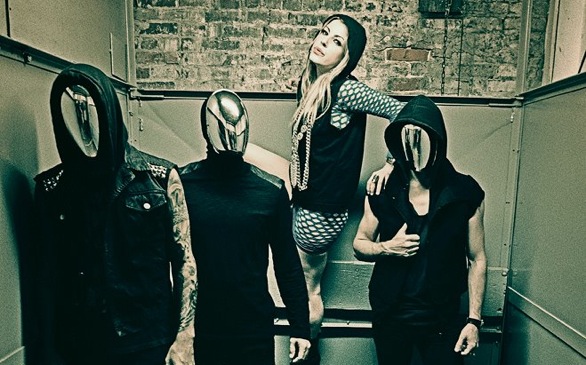 Five Knives is in the studio working on tracks for their forthcoming full-length debut.
(Credit: facebook.com/FiveKnives)

This punk-leaning electro pop band out of Nashville is one giant ball of energy. Dueling synths whip up frenzied melodies, rapid-fire tom-tom beats march listeners straight to the dance floor, and singer Anna Worstell ties it all together with vocals teeming with attitude. Worstell’s sass is what sets Five Knives apart from their contemporaries.

During “The Rising,” a song about youth not wanting to be told what to do, Worstell chimes “burn down the disco!” repeatedly and with gleeful abandon. On the hip-hop flavored and kind of nasty “Messin’ With My Mind,” she comes off like Rye Rye on meth. The band apparently likes the ’80s New Wave sound too; the outre “Vive Le Roi” sounds very much indebted to that era’s Siouxsie and the Banshees.

There are only five songs on The Rising, but the sampler gives a good idea of what this band is capable of. Hopefully, the upcoming Five Knives full-length will be just as fun and feisty.