Rest Assured, the Dodgers Can Mix it Up 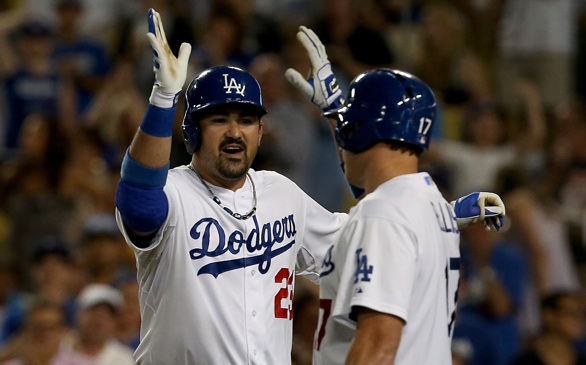 DENVER — Don Mattingly won't say it, but the Dodgers are already starting to look ahead to October. The proof was in the lineup the manager fielded in the Dodgers' 7-4 victory over the Colorado Rockies on Tuesday at Coors Field.

Yasiel Puig, who was dealing with soreness behind his right knee, was held out for precautionary reasons. Hanley Ramirez, Juan Uribe and A.J. Ellis also didn't start.

"If it was a game separating us or we were a game back or something like that, we'd do it different," Mattingly said.

Mattingly will rest key players Wednesday in the series finale against the Rockies. With the Dodgers scheduled to face left-hander Jorge De La Rosa, Mattingly is planning to give days off to the left-handed-hitting Andre Ethier and Carl Crawford. Adrian Gonzalez is a career .375 hitter against De La Rosa, but could also be on the bench.

The Dodgers increased their lead to 13 1/2 games over the second-place Arizona Diamondbacks in the National League West. Their magic number to clinch the division is 12.

Mattingly's long-view approach has resulted in a small change in his catalog of cliches. Mattingly used to be fond of saying he was fielding the lineup that he felt gave him the best chance to win that day. Here's what he said before the game Tuesday: "When I write that lineup out today, I expect us to win."

And they did, even against starter Jhoulys Chacin, whose individual brilliance this season has been obscured by his team's mediocrity. Nick Punto, who replaced Ramirez at shortstop, led the assault with a season-high four hits.

"You've got to give Donnie a lot of credit because he has kept all of us fresh," Punto said.

The Dodgers went ahead, 3-0, in the second inning, which started with Ethier collecting his third double in two days. Mark Ellis walked, after which Skip Schumaker reached base on an infield hit to load the bases.

The Dodgers extended their lead to 4-0 in the fifth inning, when Crawford scored on a sacrifice fly by Gonzalez.

That was enough of a cushion for Ricky Nolasco (12-9), who won his sixth consecutive decision by limiting the Rockies to two runs and five hits over six innings.

"Obviously, this is a dangerous place to pitch," Nolasco said. "I think the key was throwing some fastballs in. If you don't do that, these guys will start hanging over the plate."

Nolasco, who pitched eight scoreless innings in each of his two previous starts, hasn't lost a game since July 14. Acquired in July from the Miami Marlins, he is 7-1 with a 2.27 earned-run average in 11 starts with the Dodgers.

Left-hander Paco Rodriguez served up a home run to pinch-hitter Josh Rutledge that cut the Dodgers' lead to 4-3, but a ninth-inning error by the Rockies blew the game open.