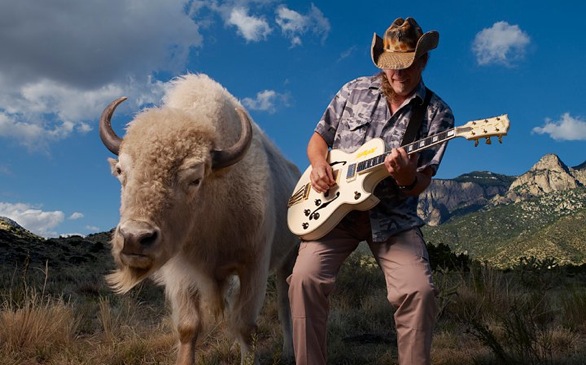 Ted Nugent is an avid hunter as well as a musician.
(Credit: Facebook.com/tednugent)

Classic rocker Ted Nugent no longer sells out massive arenas. However, partially because of his controversial political views and the television appearances that go along with them, he’s managed to bring lots of young fans into the fold while also retaining the die-hards who’ve been with him for decades.

All those fans want just one thing from their Uncle Teddy: loud and proud good old rock’n’roll. And that’s exactly what Nugent gives on this two-CD live set of hits and favorites.

The show begins appropriately enough with Nugent shouting “Man your battle stations!” before launching into the rowdy “Free for All” and setting the mood for the ensuing non-stop guitar barrage of “Stormtroopin',” “Wango Tango” and “Just What the Doctor Ordered.” Nugent’s back-up band, comprised of longtime Nugent side man Derek St. Holmes on guitar, Greg Smith of Rainbow on bass and Mick Brown from Dokken on drums, has no problem keeping up with the guitar hero. St. Holmes even occasionally handles vocal duties.

Nugent introduces perennial naughty favorite “Wang Dang Sweet Poontang” as “soul music,” rants about deer hunting and blood brothers while he rips through a two-minute solo to open “Need You Bad” and humorously lists his idea of life’s three essentials as a prelude to “Turn it Up”: attitude, spirit and “dead shit on the grill.”

He lays the hyperbole on pretty thick throughout the show, but the guy has the musical chops to back it up. The adoring crowd eats up every second of it.

Ultralive Ballisticrock is super high energy from beginning to end, but the set ends on an especially strong note with the hits “Cat Scratch Fever” and “Stranglehold” along with a take on “Great White Buffalo,” a tune Nugent first cut with his late ’60s band the Amboy Dukes.