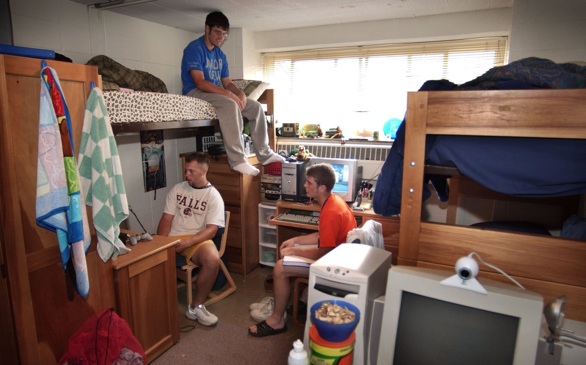 How can complete strangers live together and get along in a small dorm room?
(Credit: WILLIAM MEYER/MILWAUKEE JOURNAL SENTINEL/MCT)

Soon after she settled into her new dorm room at Cal State Northridge, Brittany Brockman figured she should give her new roommate fair warning: She's a bit of a neat freak.

Her roommate, Leslie Rosales, 18, didn't make much of the admission. But she didn't know yet just how serious Brockman was.

Inside a freshly decorated (mostly pink) room, her quirks began to show. And in thousands of other dorm rooms around the country last week and in coming weeks, a similar scene plays out.

A teary-eyed parent, a final hug and then two or three or four strangers alone in a shoebox-size room.

The collision of quirks and emotions can cause strife and spark fast friendships — or make fast enemies. And as the first-week jitters blur into a stream of all-nighters, school stress compounds annoying habits and roommates must continue to coexist.

"I'm a very clean and organized person; I like things where they belong," Brockman said. "I guess I just have to learn to have more patience for messy stuff."

Colleges around the country have been giving incoming students more freedom to find their own roommates. At CSUN, students can opt for the time-honored rite of rooming with a complete stranger or seek out like-minded freshmen by taking a survey offered by the university's campus housing department. The survey covers sleeping, drinking and cleaning habits, among others.

Abby Souza, 18, of Davis was given the names of other incoming freshmen whose survey answers aligned closely with hers. Armed with those names, she commenced her Internet sleuthing — a common way to gain a peek into someone's life without actually meeting.

She quickly found a blog page belonging to her future roommate. "I went through all her photos, read her posts — you know, to see what she's like," Abby said.

They soon connected on social media, traded phone numbers and texted and chatted with each other weeks before moving to campus.

"We talked about our lives, boys, friends, TV shows," she said. "We already knew each other before we got here."

Students who have a light Internet footprint can be left out of pre-college bonding, said Carolina Salguero, 18, of Los Angeles, who bonded online with two of her three roommates before arriving at school. The third roommate had missed out.

"I couldn't find her anywhere — and she showed up and we didn't know her," she said. "We had to start over."

Jay Chaskes, a retired professor of sociology and social psychology at Rowan University in New Jersey, said the urgency to forge bonds is common.

His work focusing on the experience of first-year college students found that in their first year, students typically hoped to "make friends, become more independent and get good grades — in that order," he said.

When asked what they were most anxious about, students typically replied with the same answers and in the same order, Chaskes said. It is natural for them to hope for a bond with whomever they share a living space.

"They're most focused on the social aspects of their college experience," he said. "They're a stranger in a strange land. It's about a sense of belonging — a sense of fit. It's a very human thing."

Emily Bjerke, 17, from Lafayette, near San Francisco, is a freshman at Loyola Marymount University. She wanted a roommate she could explore Los Angeles with, who'd be up for attending concerts and was interested in joining a sorority, as she was. She worried about leaving it to chance. "I definitely didn't want to do the random pairing," she said.

She joined roomsurf.com, one of several online dating-type websites for finding roommates. For $19.99, users fill out a questionnaire and are given a list of other users at their future school, ranked by compatibility. Emily quickly contacted one of her matches, and they hit it off. They now room together and so far get along well, she said.

"Whatever path I chose, it was going to be a gamble," she said. "But if I had more say in my roommate and it doesn't work out, then it's my fault and I have to deal with it myself."

But a successful roommate pairing is less about shared interests and more about two people who can navigate the intricacies of living with another person, Chaskes said.

Complaints he often heard from freshman rarely centered on different interests but on the minutiae of cohabitation. "It's more, 'She touched my stuff, he borrowed my shirt without asking, he's always leaving hair in the sink,'" Chaskes said. "It's the activities of daily living that they need to negotiate."

The inability to do that can lead to roommate horror stories. And there are no shortage of those.

Amy Garcia, 19, a sophomore at CSUN, said her relationship with her roommate deteriorated as quickly as the cleanliness of the room.

"It smelled like feet all the time," she said. "She would only shower, like, once a week."

Garcia politely asked for a room transfer, and she got along better with her second roommate. "She showered and stuff — so that was good," she said.

Alexa Gatti, a 19-year-old sophomore at CSUN, tried desperately to forge a friendship with her roommate. Each day, Gatti said, she would try to initiate a conversation with her, to no avail.

Soon, Gatti would offer only a hello and a goodbye. Eventually, the two lived together without uttering a word to each other.

"I just really wanted to make a friend. She didn't," Gatti said. "She acted like I was the wall."

On a recent afternoon, Brockman and Rosales decided to make tacos for dinner in the kitchen they share with two other girls in their dorm suite. Brockman wondered aloud if they were supposed to use cooking oil on the ground beef.

"I don't know. Should I call my mom?" Rosales said.

"I was thinking of calling my mom!" Brockman answered with a laugh. On their own, they decided against the oil. Smoke soon wafted from the kitchen.

They sat down at the table and began to eat.

"I like this," Rosales said, seemingly referring to both the tacos and their living situation.

"Me, too," Brockman said with a smile.