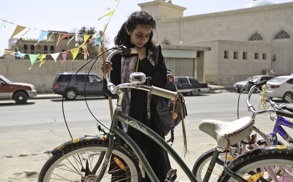 Don’t underestimate 10-year-old Wadjda. Even though she’s a little girl living in a country that doesn’t necessarily view men and women as equals, she will stop at nothing to get what her heart desires.

Director and writer Haifaa Al Mansour has created a beautiful drama with her film Wadjda. Set in a suburb of Riyadh, the capitol of Saudi Arabia, Wadjda tells the story of a slightly rebellious little girl trying to raise money to buy a bike, even though her mother, principal and the rest of society believe a girl riding a bike is inappropriate.

Immediately, you are curious about where this film is going. In the opening scene, Wadjda (played by Waad Mohammed) is asked to recite words to a religious song. Dressed in an all-black cloak, called a “awrah,” like all of her (female) classmates, Wadjda stands out because of her shoes; the other girls wear simple black ones, while she dons a pair of beat-up Chuck Taylor sneakers. Okay, this girl has spunk.

It’s not surprising when Wadjda sets her mind to buy a shiny green bike so she can beat her best friend, who is a boy, in a race. Her mother won’t give her the money, so she comes up with harmless moneymaking schemes to raise the funds herself: selling bracelets at school, delivering forbidden messages for classmates – Wadjda is going to get herself a bike. When she gets caught with her contraband, Wadjda then decides to join the religious club and enter a Koran recitation competition that would reward her the money. Her journey to her dream bike is only an arm’s reach away…or is it?

The film does an excellent job of giving viewers an (I assume) accurate portrayal of what life is like in Saudi Arabia for women: they must cover virtually all parts of their body except for their eyes, their voice must not be too loud for men to hear (a woman’s voice is her “nakedness,” says Wadjda’s principal), women should not be with men who are not family, they should leave their location if they are in other men’s view, girls as young as 10 years old can be married off to a 20-year-old man and so much more. The difference between American culture and Saudi Arabian culture is evident, which is why audiences can’t help but chuckle when Wadjda says or does something that is so “westernized.”

Mohammed is a joy to watch on screen. At 12 years old, she has a strong acting presence and maturity. This role was made for Mohammed; the little actress even came into her audition with the same defiant, rebellious attitude that Wadjda embodies along with a pair of Chuck Taylors.

Wadjda may be the main character of the film, but her mother has a significant role. Played by Reem Abdullah, who is considered the most well known actress in Saudi Arabia, Wadjda’s mother is a beauty. However, despite her beauty, she is worried if her husband will leave her for a second bride. Although it’s obvious that she loves and adores Wadjda, it’s hard to decipher where she stands on the issue of the bike: does she or does she not support Wadjda’s dream? She flat out tells her daughter that it’s not suitable, yet she doesn’t stop her from raising the money. The film’s ending (might) take you by surprise.

It’s important to understand that Wadjda is not just Wadjda’s story; it could be the story for many Saudi Arabian girls and women who yearn to go against the patriarchal customs and do what their hearts desire. This is what truly makes the film spectacular.

Wadjda releases in theaters on Sept. 13, 2013 in Los Angeles and New York.