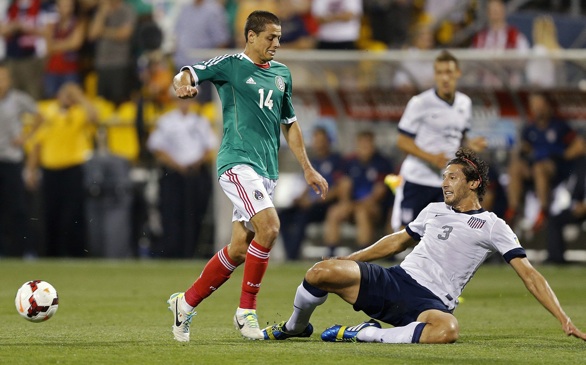 Anyone care to samba?

The United States punched its ticket to next year’s World Cup in Brazil last night, defeating Mexico by a score of — what else? — 2-0 in a World Cup qualifier in a packed and partisan Crew Stadium.

A goal early in the second half by U.S. forward Eddie Johnson helped the Americans improve to 5-2-1 in the final round of CONCACAF regional qualifying and, coupled with a Honduras tie with Panama later last night, ensured the Americans will advance to Brazil for a seventh consecutive World Cup.

Johnson scored on a header off a corner kick by Landon Donovan. Donovan, the Major League Soccer star with the Los Angeles Galaxy who a three-month hiatus from the sport and considered retirement last winter, is perhaps Mexico’s greatest nemesis.

He made it 2-0 in the 78th minute, converting a cross by Mix Diskerud that Clint Dempsey slightly redirected toward the all-time U.S. scoring leader at the far post.

Donovan recorded the 57th goal and 57th assist of his U.S. career. It was his sixth goal in 16 games against Mexico, a team he flummoxed four years ago during a 2009 qualifier in Crew Stadium.

“It certainly never gets old,” Donovan said. “They looked relatively timid and shy throughout. I've never seen a Mexico team look that way, and when we scored the (first) goal, I think that it was pretty clear that we were going to get a second or third or it was going to end 1-0."

The loss was the fourth straight for Mexico in qualifiers at Columbus, all by 2-0 scores.

“It’s become its own monster,” U.S. goalie Tim Howard said. “People want to come to Columbus to see U.S.-Mexico. It’s almost like the mecca, really, for us. You almost feel like it’s our destiny to win here. “

A sold-out crowd of 24,584 — about 90 percent of them U.S. fans — chanted and drummed their way through high temperatures and humidity. It was 90 degrees at kickoff.

Those flag-draped fans, along with the U.S. team, immediately turned their attention to Honduras, where a 2-2 tie clinched a spot for the U.S.

The American team watched the end of the Honduras game in its locker room and returned to the field an hour after leaving it to celebrate with the remaining few hundred fans.

“It’s a huge milestone whenever you make it to the World Cup,” U.S. coach Jurgen Klinsmann said. “It means a lot to all of us, to all the fans and to our country as well.”

Earlier, U.S. fans serenaded Mexico with chants of dos a cero and “you’re not going to Brazil.” The former, now a 12-year-old American tradition, was kept relevant when Dempsey missed a penalty kick in the closing minutes.

“I just tried to put it in the corner and hit it hard,” Dempsey said. “But my accuracy was off."

Mexico (1-2-5) is in danger of missing the World Cup for the first time since 1990. The Mexicans faded in the second half, but Howard kept the U.S. in the game.

Howard made three spectacular saves in the first half, inciting roars from a temporarily tense crowd and kept it scoreless until Johnson struck in the 49th minute.

Playing without two-way forward Michael Bradley and three other potential starters because of yellow-card suspensions, Klinsmann made several changes to a lineup that lost 3-1 in a qualifier at Costa Rica on Friday night.

The rebound was sweet.

“That’s a real atmosphere,” Donovan said. “That’s what we face when we go away and it’s nice that other teams have to face it when they come here. We enjoy playing in front of a crowd like that and they certainly boosted us tonight.”