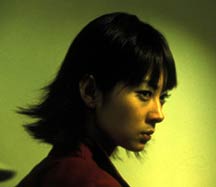 Japanese cinema has recently created its own niche by being uniquely creative in the horror genre. With Hollywood’s successful re-tooling of the Japanese horror classic Ringu into 2002’s The Ring, it seems that all of world cinema is looking toward the Land of the Rising Sun to see what horror classic will be devised next. That classic is called Ju-on (The Grudge), which is sure to become a cult favorite in the years to come and soon to be featured as a Hollywood remake starring Sarah Michelle Gellar.

Edited in a non-linear manner by going from the past, to the future and then back to the present, Ju-on takes place in an ordinary looking suburban house — a place that was once occupied by a married couple and their son. One fateful day, the husband flies off the handle and brutally murders his wife and child. From then on, anyone who enters or lives in the house must deal with the murderous evil spirits that make eerie noises, particularly on the second floor and in the attic. These evil spirits are holding a "grudge," hence the title of the movie.

Writer and director Takashi Shimizu follows up his straight-to-video features Ju-on and Ju-on 2 with this first theatrical release of the series. Loaded with lots of plausibility, as well as borrowing a few aspects from The Exorcist, Ju-on more than does its job at presenting the terror needed for moviegoers to cover their eyes and jump from their seats. Shimizu shows a real gift at presenting this terror in both broad daylight and illuminated interiors, instead of the usual method of utilizing the fear of darkness to scare the audience.

During the silent era, the Germans invented the horror film with The Cabinet of Dr. Caligari. In the 1970s, the Americans perfected it with The Exorcist. Now with Ju-on, it is the Japanese who are keeping this genre alive.

Ju-on is currently in theaters.