By Lisa Krieger and Becky Bartindale 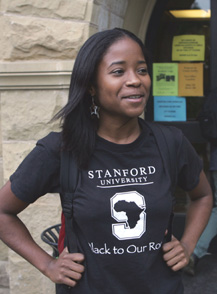 Untitled Document As a black child growing up in America, Krystal Quinlan learned all about slavery, segregation and the civil rights movement.

But it didn’t really hit home. The daughter of Caribbean immigrants "grew up not really identifying with the history of African-Americans in the U.S.,’’ she confesses.

Quinlan, now a 21-year-old Stanford University senior, is part of a new generation of students and professors who are extending their intellectual reach beyond the confines of ‘60s-era black studies courses to examine the influence of African cultures around the globe.

"When I look at the African diaspora, I see that we’re all connected,’’ says Quinlan, who is researching the role of Africans in South America. "I realize that there is a commonality of experiences.’’

The shift can be seen in curriculum name changes at academic departments around the country.

At Stanford, where there is a longstanding commitment to African academics, "there is a more serious engagement with Caribbean, Latin and South American cultures,’’ says Lawrence Bobo, director of the African and African American Studies Program. There also is increased interest in African languages on Stanford’s campus.

"It is about evolving – reflecting where the discipline is today,’’ says Dorothy Tsuruta, chair of San Francisco State University’s Africana Studies program.

"The term ‘Black Studies’ specifically identifies with United States alone,’’ she says. "It limits the reach of the field. Now, the discipline has matured to place the African-American experience in a global context.’’

"Once you understand who you are and where you are, you get to a point where you want to understand your relationship to the world in which you live,’’ she says.

Black studies emerged in the late 1960s, in response to student complaints that the African-American experience was not represented in the traditional disciplines.

But issues of race, class and gender are now better reflected in the classroom, scholars agree.

An even larger factor is the changing student body. Since 1990, more African immigrants have arrived in the United States voluntarily than the number who came as slaves before international human trafficking was outlawed in 1807. About 50,000 legal immigrants come each year.

"The timing can be attributed to immigration flows,’’ says Stanford’s Bobo. "There are more people and more students from different backgrounds coming in to universities. So there are more scholars focusing on how the concept of race develops in other countries, and comparing it to the U.S.’’

Notes Tsuruta: "Look at France right now. If you close your eyes, it sounds just like Watts.’’

Immigrants and children of immigrants made up 41 percent of the black student population at elite schools such as the University of California-Berkeley, Yale, Columbia, Duke and Northwestern in 1998, according to a study by Princeton University sociologist Douglas Massey. The proportion is believed to have climbed since then.

Some African-American scholars are not convinced by the new global focus – and say aging programs may not be worth saving.

"Black studies programs have been dysfunctional since their birth. They were created out of a reaction to student unrest. There was no academic imperative,’’ says Shelby Steele, a research fellow at Stanford University’s Hoover Institution. "The experience of blacks could be much better examined in the traditional disciplines of history, literature and sociology.’’

Distributed by Knight Ridder/Tribune Information Services.
Article posted on 1/9/2006
This article has been viewed 2319 times.