Grouplove - Meta World Peace: Spreading Rumours keeps it all in the family. 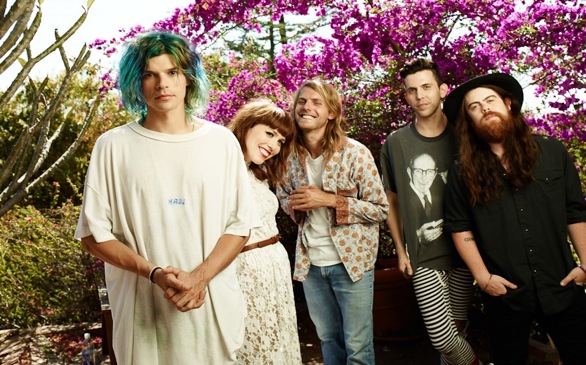 “I’d rather be a hippy than a hipster,” proclaims Grouplove, the effervescent Los Angeles quintet known for its peacenik vibe and inescapable hooks. It’s a line from a new song, “Hippy Hill,” that decries this modern world’s obsession with faux connectivity. For this band, tactile bonding with one another and with fans is the way to go.

“I’d rather be someone of that world, of the old school, of ‘Let’s fucking really get to know each other— not always staring at a phone,” guitarist Andrew Wessen said in a recent interview with Campus Circle. “We talk often about that. It’s sort of hypocritical— we have Instagram and stuff. But it’s part of that world.”

Grouplove aims to meld the old and new schools of fan interaction by embarking on the Seesaw Tour to promote its sophomore release, Spreading Rumours (Canvasback/Atlantic, Sept. 17). Anchoring itself in major U.S. cities for back-to-back nights, the band will go electric the first evening and then offer acoustic interpretations of songs the second. And though it’s sold out huge, classical venues such as the Wiltern, Grouplove is sticking to intimate clubs this go-round.

The tech-driven side of the Seesaw Tour involves Grouplovers searching online for clues about concert tickets hidden around the various cities where the band will perform. Wessen credits singer and keyboardist Hannah Hooper for that concept.

“Hannah’s always coming up with crazy ideas,” he said. “She’s always trying to think of ways to connect lots of people to hearing our music and kind of think outside the box.”

Grouplove was formed late last decade in a totally out-of-the-box manner. Wessen, Hooper, singer/guitarist Christian Zucconi, drummer/producer Ryan Rabin and bassist/vocalist Sean Gadd all met at an artist’s commune on the island of Crete and found an instant connection. They eventually reconvened in L.A. and hammered out the spunky debut Never Trust a Happy Song, which spawned the massive radio earworm “Tongue Tied.”

The unconventional creative streak continues with Spreading Rumours, written and recorded over the course of about 10 weeks earlier in 2013 at a home once owned by producing legend Berry Gordy. Wessen recalled the positive air present at the Hollywood locale, where his band lived together during the intense procedure. The spirits of Michael Jackson and the Beatles were floating about, giving inspiration to a wide variety of Rumours tunes.

“You could definitely feel that buzz in the walls,” Wessen said. “It was actually renovated. But weird stuff we were channeling… I don’t know what was going on ‘cause we would record all day and night. It was literally impossible to not live and breathe the record at all times.”

The house and record became a bit of a cocoon, immune from outside influence. Often, artists with the amount of mainstream success Grouplove has experienced are subject to pressure from labels to sound a certain way or work with particular engineers to get that fabricated tone. Not this fearsome fivesome. Rabin – son of prog-rocker Trevor Rabin (Yes) – again produced, and few updates were made sonically from Trust to Rumours. If it isn’t broken, don’t fix it, Wessen supposes.

The jams are consistent on Spreading Rumours. The already monstrous “Ways To Go” has earned applause for its bounciness and its tongue-in-cheek video featuring a kid version of North Korea’s leader, Kim Jong Un. “Raspberry,” a personal favorite of Wessen’s, is a Pixies homage rife with vocal pairings that would make Black Francis and Kim Deal proud. “Bitin’ the Bullet” is a scruffy hip-hop number, whereas “Borderlines and Aliens” is a frenetic combo of Nirvana and post-punk.

The guitarist credits the album’s diverse tunes to modern tastes. As someone who grew up in the staunch SoCal punk scene, he’s eager to break free of expectations and confinement.

“Maybe people are still like that in some circles, but I really think the general audience is like, I like that hip-hop song. I like that pop song. … Genres aren’t as rigid anymore,” he said. “As a band, we’re embracing that. We can have a weird-ass electronic song, and the next song can be a folk song, and the next a heavy, weird cross-genre of 7/8 time measures.”

There’s been no calculated ride to the top for Grouplove. Where most bands on the rise will zig, Wessen and Co. zag. In fact, he notes that despite all the fame, he drives a beloved hoopty that’s gotten him around since he was 16. And on the day we speak with him, he’s seaside out at Topanga Beach trying to catch waves on his surfboard. Sounds pretty down-to-earth and hippiesque to us.

Grouplove performs at the Troubadour on Sept. 17 and the Hollywood Forever Masonic Lodge on Sept. 18.