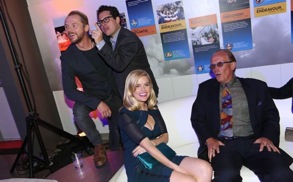 The cast laughs and jokes around at the DVD release party.
(Credit: Debby Peters)

A white carpet and red lit-up trees paved the way for the USS Enterprise crew as they made their way to the last resting place of the Space Shuttle Endeavor on Tuesday evening.

They were all at the California Science Center to celebrate the Blu-ray/DVD release of one of this year’s most highly anticipated movies, Star Trek Into Darkness.

At the event were some familiar faces such as Bruce Greenwood (Captain Pike), Simon Pegg (Scotty) and John Cho (Sulu). As for the new additions to the Enterprise, Alice Eve (Carol) and Peter Weller (Admiral Marcus), they shined on the runway as they did in the Star Trek sequel.

With director JJ Abrams at the helm to get the party started, it is as if we had stepped onto the set of Star Trek. M83’s "Midnight City" played over blueish-purple lighting that covered the entire hanger, making the impression that the Endeavor is once again flying through space.

The cast remained close in the VIP area, sharing in some laughs and shenanigans as actors usually do in between takes.

With the DVD release falling just before 9/11, Abrams took the stage and gathered the crowd to once again dedicate the film to our post-9/11 veterans for their service to this country.

Star Trek Into Darkness is currently available on DVD.