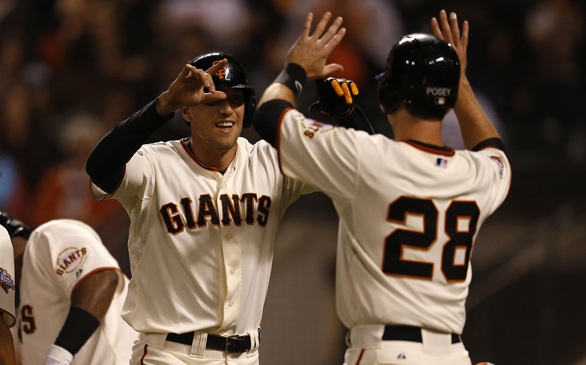 Brandon Crawford grew up in Pleasanton rooting for the Giants, and you know what that means.

"Being a Giants fan," he said, "I was taught at a young age not to like the Dodgers."

And now that he's a professional, are those sentiments gone?

"I mean, we still have the rivalry," said Crawford, diplomatically. "We've had our share of going back and forth with the Dodgers, not as much as other teams this year."

The Giants, who rallied to beat the Rockies 4-3 on Wednesday, have gone from top of the heap to bottom of the barrel in one short year and now face the ultimate low blow: witnessing the Dodgers clinch the division. With cameras focused on Brian Wilson.

It could happen during the Giants' upcoming four-game series at Dodger Stadium, which starts Thursday night. After a 4-1 loss to Arizona on Wednesday, the Dodgers' magic number for clinching is six, so partying on the Giants' watch is possible Sunday. The Diamondbacks host Colorado in a three-game series beginning Friday.

In fact, the Dodgers would prefer to pop the corks Sunday because they open a 10-game trip Monday.

"It's never fun watching somebody else celebrate clinching a division or even winning on a walk-off, anything like that," Crawford said. "Our goal is to go down there and win some games. Let's see if we can avoid a celebration for them."

Brandon Belt, who drove in Wednesday's deciding run on a bases-loaded single in the eighth inning, recalled the Diamondbacks celebrating the 2011 division title in Phoenix with a 3-1 win over the Giants - and didn't like the memory.

"If we have any say in it, which we do, we don't want them to be able to celebrate," Belt said of the Dodgers. "We've done well in the West, so we're looking to keep that going."

No NL West team has a better intradivision record than the Giants, who are 37-29. Problem is, they're 29-51 against the rest of the field.

Across the clubhouse, Marco Scutaro was the last Giant to pack his bags for the trip to Los Angeles. He wasn't interested in addressing how the Giants could try to prevent the Dodgers from clinching in the series.

"It's not like if we sweep those guys, we'll be right there," he said.

The Giants clinched something else Wednesday - their first winning homestand since May. Down 3-1, they scored once in the seventh on Hunter Pence's sacrifice fly (nearly a grand slam) and twice in the eighth when they loaded the bases and got consecutive singles from Scutaro and Belt.

Afterward, Crawford was asked about the Giants-Dodgers rivalry and how the teams have taken turns clinching against each other and eliminating each other.

"I remember the Braves' clinching," he said of the classic race of 1993, which ended for the Giants in a loss at Dodger Stadium, leaving them one game behind Atlanta. "I remember my dad being upset about it. I was 6, a big fan."