Icona Pop's Aino Jawo Says, "I Love It!": The singer talks about fans, songwriting and more. 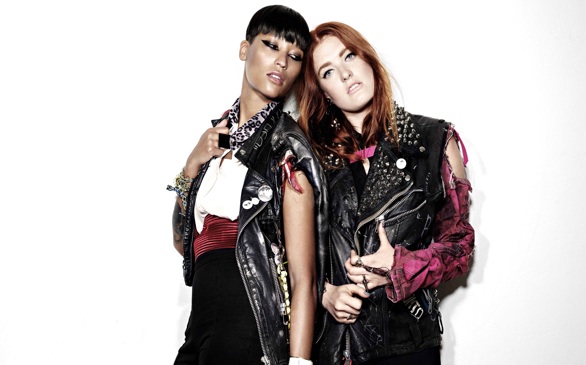 In Italian, the phrase “icona pop” translates as pop icon, which is appropriate for the fashion-possessed duo of the same name.

This is … Icona Pop, Icona Pop’s debut album, is being released on Sept. 24 and features the duo’s melodic and catchy girl anthem “I Love It” plus 10 other tracks, tracks that have that “wow pop” factor to become massive hits: “Ready for the Weekend,” “We Got the World,” “On A Roll,” and “Light Me Up.” The duo, Caroline Hjelt and Aino Jawo, is currently on tour gracing U.S. cities (however, the west coast tour dates are postponed, due to sickness).

Jawo talked with Campus Circle in a phone interview while in Austin preparing for a sold-out show at Emo’s East. She told us their album, a five-year long process, started when the Swedish band members met at a party and immediately started writing music.

“Sometimes you make up stories,” Jawo said about the songwriting process. The duo co-wrote most of the songs on the album. “Sometimes you have to re-experience things and usually when you write, you go though an emotional journey. Sometimes it can be torture because you don’t want to remember, but you have to. It’s awful. There is a lot of hard experiences, especially when it comes to love and falling in and out of love.”

Love, whether romantic or friendship-based, is a recurring theme throughout This is … Icona Pop. Romantic love is purely surface on “I Love It.” The song confronts, with fists raised high, an emotional breakup between two lovers, and the intensity provides fans with the delicious lines: “I crashed my car into the bridge. I watched, I let it burn. I threw your sh#t into a bag and pushed it down the stairs.” Wouldn’t repeating that mantra help anyone who has broken up with a loved one? The song has enough infuriation and rocker-mentality for men to feel comfortable yelling, and it has a familial recognition to be sung in a hairbrush by women of all ages.

“A lot of the songs we write are about ourselves, our friends, or someone around us,” Jawo continued. “We also love to watch people. We had more time before, but you get to make up stories in your head.”

It is also refreshing to hear a playful twist on female friendships in “Girlfriends,” which samples Tupac’s “Me And My Girlfriends,” using the iconic lines: “All I need in this life of sin is me and my girlfriend/Down to ride till the happy end, is me and my girlfriend.” The single was produced by Norwegian producers Stargate, who created four No. 1 singles for Rihanna and worked with Beyonce, Wiz Khalifa, Selena Gomez, Chris Brown, Ne-Yo and Alexis Jordan.

“There have been a lot of people involved. We worked with a lot of amazing producers: Patrik Berger, Elof Loelv, Shellback (Karl Johan Schuster), Knuckles and Stargate,” added Jawo.

Overall, the album’s sound feels the way Icona Pop dresses – ready for the weekend, edgy and future forward. Their go to color of choice when coordinating outfits is black – close behind is gray and white – which is odd considering how lively the duo is. However, it could be more about “the look” and not the substance. But it also may have something to do with absence or being “un-pregnant” after completing their album.

“It’s awkward when you finish an album. It’s like, ‘Oh, that’s it.’ There is so much stress before you finish up an album. It’s not like, ‘I’ve written these 12 songs, and they’re going in, and we have an album.’ We changed a lot of the songs at the last minute, because the studio didn’t think the songs expressed what we were feeling enough. And then the album is out and you ask yourself, ‘What am I going to do now? I better write more music,’” said Jawo.

Currently, Icona Pop is on their first U.S. headlining tour, The Iconic Tour, which is presented by TIGI Bed Head. The tour started in Ozark, Ariz. at the Wakarusa Festival and ends in Brooklyn, N.Y. at Music Hall of Williamsburg. The tour has some expected and unexpected stops in between.

“It’s always nice to travel to places you’ve never been to before. I’ve never been to Salt Lake City. I’m excited for that show. As well as New York, Miami, Chicago, Seattle - all of the big cities,” said Jawo. “I’m so new at this. I’m also looking forward to seeing the country more. America is a huge country. Being a Swedish person, I don’t think I understand how far you have to travel.”

Back in 2011, the band first started booking major shows throughout Europe. Comparing those early shows with the their current tour, Jawo noticed a few differences in audiences stateside versus audiences in Europe.

“If you play in Paris, it’s different than if you play in Stockholm. The best fans, by far, have been in America. Some people are actually following us from different cities. They stand outside our bus just to get a glimpse of us waving. We think it’s important to stay in contact with all the people and talk to them. I would say that they are amazing dancers. I love it.”