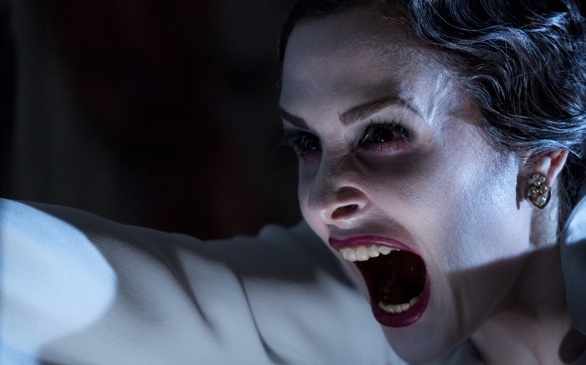 In 2011, Insidious offered a haunted house tale that fell into the Poltergeist” mold. There was a child in jeopardy, a mother (Rose Byrne) trying to wrap her head around the supernatural occurrences and a father (Patrick Wilson) who chose to be in denial. More over, it stuck with audiences thanks to some truly frightening images and an unsettling finale.

Throughout Insidious, the main characters sought answers. In its sequel, however, most of them seek closure and some sense of comfort.

James Wan — who directed Insidious, the first Saw, Dead Silence, and more recently, The Conjuring — has proven that he’s an innovative and creative player in the horror genre, but Insidious: Chapter 2 isn’t really a horror film. It’s a suspenseful thriller with a few supernatural elements. It dials up the tension but rarely delivers truly lasting scares as more and more of the film’s mysteries are knocked down.

For a sequel that seemed so unnecessary, maybe that was the best route for Wan and Co. to venture down.

Chapter 2 picks up just days after the events of Insidious. Josh Lambert (Wilson) has just returned from The Further — a spiritual purgatory between Earth and the afterlife that the dead and other evil entities inhabit — where he saved his son Dalton (Ty Simpkins) from the demon who wanted to possess his body.

Josh and his wife, Renai (Byrne), having recognized Josh and Dalton’s dangerous connection to the spirit world, move themselves and their kids out of their apparently haunted house and in with Lorraine, Josh’s mother (Barbara Hershey). But just like before, the insidious visitors from the spirit world follow them and continue to wreak havoc. Renai constantly hears the grand piano playing by itself in the den. Poor Dalton can’t get any sleep because the ghostly figures haunt him while he rests.

But Josh has seemingly been affected the most. Those who have seen Insidious, of course, remember that the ghost of a frightening and “parasitic” old woman used Josh’s body as a vessel to return to the human world. Although the audience gets little glimpses of what she’s doing with Josh, Renai and the kids remain somewhat oblivious until she notices some strange behavior from him. For instance, he doesn’t remember the song she wrote for him and he constantly pushes everyone to move on from the paranormal events as if they’d never happened.

Knowing something’s up, Renai enlists the help of eccentric ghost hunters Specs (Leigh Whannel) and Tucker (Angus Sampson), who frequently provide the movie’s comic relief — even when Chapter 2 doesn’t necessarily need it. Those two call upon Carl (a medium played by Steve Coulter) who can commune with the spirit world, much like the way they turned to psychic Elise (Lin Shaye) who died at the end of Insidious, but is seen in flashbacks here.

The talented main cast puts forth a solid effort, even though they occasionally deliver some lines that were written very lazily. Unfortunately, their work gets dragged down a little bit by the supporting over-actors who call The Further home. There’s a scene that involves a “girl” named Marilyn that’s almost unbearable to watch because it’s so hokey.

That said, Wan deserves a lot of credit. While no one may have asked for a sequel to Insidious, he does an excellent job at weaving storylines, visuals and seemingly forgettable scares from the first film together with major plot points in the sequel. And even though the cerebral horrors, disturbing images and the jump scares are mostly missing in Insidious: Chapter 2, Wan rarely allows the suspenseful tension to fade away.

Just as he proved with The Conjuring, Wan is a master at making viewers bite their nails. However, those instances rarely lead to screams in Insidious: Chapter 2.

One last tip: See the first one before you see Insidious: Chapter 2. Otherwise, you’ll be as lost as a helpless child in The Further.