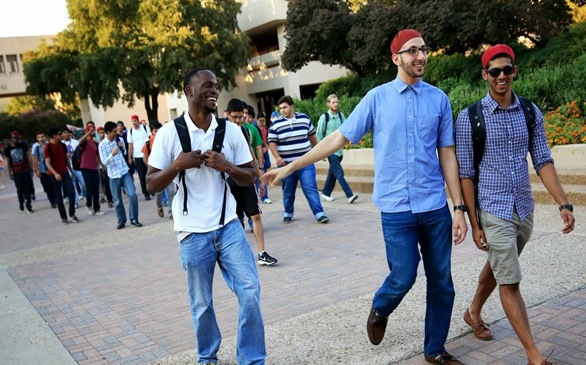 Rush Week Fall 2013 for ALM's Grand Alif Chapter at the University of Texas at Dallas.
(Credit: Dylan Hollingsworth via facebook.com/almfrat)

Alpha Lambda Mu, also known as Alif Laam Meem, is considered the nation's first Muslim fraternity, and it's gaining recognition across the country.

The fraternity was first established in February at the University of Texas at Dallas, and four additional chapters are in the process of being formed at Cornell University, University of Pennsylvania, University of California, San Diego, and University of Central Florida. Alpha Lambda Mu is not your stereotypical Greek fraternity; the members don't drink alcohol, their social activities often focus on community service, and they donate the $100 initiation fee to charity.

Ali Mahmoud, the organization’s president and founder, said, “Muslims in America are in a similar position, and our fraternity is fulfilling those needs as well as many more. We're paving a new path for Muslims on campus to have an organic, wholesome college experience without having to compromise the values of their religion.”