Dodgers' Magic Number Stuck at Four After Loss to Giants 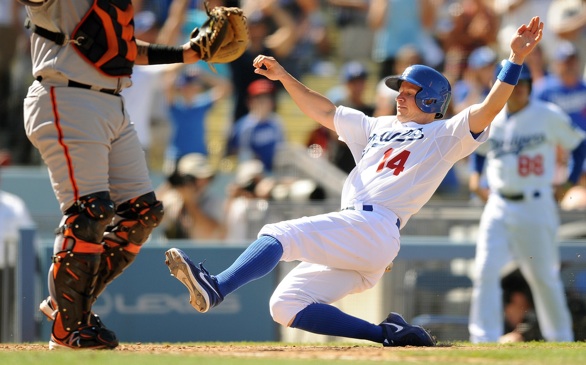 Stuck on four. No less, no more.

The Dodgers failed to move the needle any closer to clinching the National League West for the second day in a row, but at least the stalled pursuit led to more international intrigue during a 4-3 loss to the San Francisco Giants on Sunday at Dodger Stadium.

An eighth-inning pinch-hit homer by Brett Pill off Dodgers reliever Paco Rodriguez, in addition to two more home runs by Hunter Pence, was just enough for the Giants to secure three of the four games and prevent the Dodgers from doing any sort of celebration during their extended stay in L.A.

Not even Arizona’s win over Colorado in Phoenix did the Dodgers any favors.

Fielding a lineup that looked more like an optical illusion than a pennant contender, Dodgers manager Don Mattingly ended up sending supposedly too-injured Yasiel Puig as his make-or-break pinch hitter with two out in the bottom of the ninth and the bases loaded.

Instead of another walk-off victory that would have shrunk the magic number to three heading into a four-game series against runner-up Arizona, Puig smacked the first pitch to Giants shortstop Brandon Crawford, who flipped to second baseman Joaquin Arias to end the game and series.

Puig, whose sliding catch in center field during an otherwise forgetful 16-run loss Saturday night apparently inflamed the hip enough to have himself removed, conveyed to Mattingly on Sunday morning he’d be OK to pinch hit, just not serviceable for outfield play.

That was hardly the way Mattingly framed the injury to the media about 2½ hours before the game, going so far as to say Puig could be out up to two weeks, while adding that he was joking.

“I was ready just like every other player,” the 22-year-old from Cuba said through an interpreter of his pinch-hitting appearance afterward. “They came to me to hit and I was ready for it. Sadly it didn’t turn out like I wanted it to, but I was prepared just like the other guys.”

Already without shortstop and cleanup hitter Hanley Ramirez (back) and center fielder Andre Ethier (ankle), Mattingly sent fresh-from-Albuquerque rookie Nick Buss to start in right field, planted Skip Schumaker as the No. 5 hitter and playing center and had Jerry Hairston Jr. go out to left field, since Carl Crawford was having back problems as well.

Add to that .228 hitter Dee Gordon in the leadoff spot and playing shortstop, and Edinson Volquez given another chance to make a start on the mound with his ERA just shy of six.

A bases-loaded-clearing double by Adrian Gonzalez off Giants starter Ryan Voglesong in the fifth inning gave the Dodgers a 3-1 advantage for Volquez, who had struck out six to that point and gave up a solo homer to Pence to start the second inning prior to that.

In the sixth, Volquez gave up a two-out single to Brandon Belt, and having hit the 85-pitch mark, drew pitching coach Rick Honeycutt to the mound.

Three pitches later, Pence took Volquez deep again into the Dodgers bullpen, and the Dodger pitcher’s day was over with the scored tied at 3-3.

“Everything felt fine, I just didn’t execute,” said Volquez, who struck out seven and got nine groundouts. “I’ve faced (Pence) a lot in the past, and he’s just hot right now. Just made two change-ups that he hit.”

Mattingly said of Pence: “That’s one guy you really don’t want to be leaving the ball up to at all. Volquez didn’t execute a couple of pitches and he made us pay.”

Rodriguez, the fourth Dodgers pitcher and one who pitched scoreless relief in 39 of his previous 43 appearances since early June, went full count to Pill before his go-ahead home run was deposited into the left-field corner for the one-run San Francisco lead.

Buss, who had his first major-league hit in his debut on Saturday night, looped a single to right to start the bottom of the ninth against Giants closer Sergio Romo. Nick Punto sacrificed him to second, and Buss was held up at third base after a sharp single to right by Gordon, who reached base in his last three at-bats.

Gordon’s steal of second on a 1-1 count to Mark Ellis opened first base, but Romo went after Ellis and struck him out.

Walking Gonzalez intentionally for the second at-bat in a row brought up reliever Ronald Belisario’s spot – and another spotlight moment for Puig to the roar of the 47,302.

One pitch later, it was over.