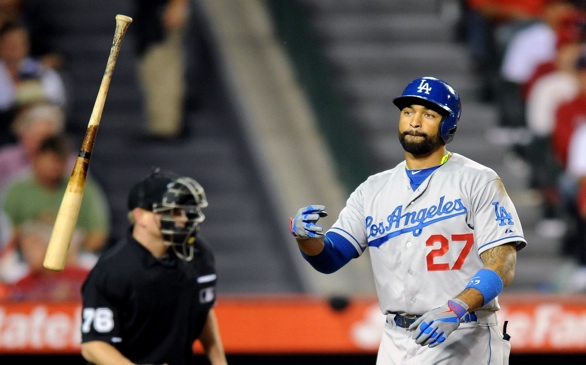 PHOENIX  — Matt Kemp couldn't run the bases at full speed in an early-afternoon workout at Chase Field, but the Dodgers nonetheless reinstated him from the disabled list Monday.

Kemp had been sidelined since July 22.

"I haven't been around the team in three weeks, so I'm excited to be here, to be in that lineup card and have a chance to come in and pinch-hit and do whatever I need to do to help the team win," Kemp said.

Kemp wasn't in the lineup for the Dodgers' series opener against the Arizona Diamondbacks, and Manager Don Mattingly said the former All-Star center fielder would be limited to pinch hitting until further notice.

Kemp looked "tentative" when he ran the bases, according to Mattingly.

"He really chopped his steps before he got to second base," Mattingly said. "I'm sure it's a little bit of fear."

Kemp landed on the disabled list for a third time because of a sprained left ankle. While rehabilitating at the Dodgers' spring-training complex in Arizona, he strained his hamstring.

Kemp said he would be cautious.

"Honestly, if I have any more setbacks, this season might be over with and I don't want that to happen," Kemp said.

Perhaps because of that, Kemp sounded slightly more open to playing a reduced role. Last month, he insisted he would return as an everyday player.

"I just honestly want to help this team any way I can," he said. "But I want to play. I don't want to just pinch-hit here, pinch-hit there. I want to go out and play. I'm trying to get to the point where I can play and help us on both sides, offense and defense."

Asked whether he thought he could play every day, Kemp replied, "We'll see. I feel I can."

Kemp played in simulated games at the team's spring-training complex over the last couple of weeks.

"I've got maybe 100 at-bats in the last week, being out here in Arizona," he said. "I feel really good at the plate."

"This season has been tough," Kemp said. "It's been somewhat of a nightmare. Once one thing gets better, something else happens. It's been a bunch of things getting on. I haven't been healthy. But if I can come back, honestly, I think I can help this team. These guys have been doing a great job without me, but I feel I can make this team even better."

Dodgers target Alexander Guerrero has changed agents and will be represented by Scott Boras. A 26-year-old infielder who defected from Cuba, Guerrero was said to be close to a multiyear deal with the Dodgers last week. It's unclear how Boras' involvement will affect Guerrero's potential deal with the Dodgers. … Adrian Gonzalez is in contention for a couple of humanitarian awards. Gonzalez is one of the six finalists for the players union's Marvin Miller Man of the Year award. He is also the Dodgers' nominee for the league's Roberto Clemente Award. Gonzalez is involved in several charitable endeavors in Los Angeles and his native San Diego. Clayton Kershaw won the Clemente Award last year.