Kings' Willie Mitchell Ready for Some New Images in His Career 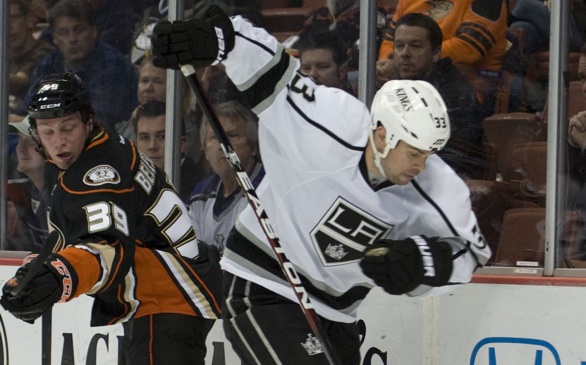 Kings defenseman Willie Mitchell took the piece of treasure from teammate and captain Dustin Brown and hoisted the Stanley Cup above his head, skated away, hollered and kicked up his right leg in celebration.

For Mitchell, it has been almost frozen in time … those scenes of the Cup at Staples Center. That was the last time — June 11, 2012 — that Mitchell played in an NHL game and the powerful image of the veteran holding the Cup has not been supplemented by new ones on the ice.

It was looking like the final frame of Mitchell's long-and-winding career because knee problems, including two separate procedures, kept him off the ice last season in the lockout-shortened season. Kings General Manager Dean Lombardi thought the 36-year-old Mitchell was all but finished, noting that "all the indications" suggested as much.

"It was depressing and frustrating for all of us because you really couldn't get a handle on what was going on here," Lombardi said.

But unexpectedly, and improbably, Mitchell has willed himself back into the conversation through a combination of rest, rehabilitation and some good fortune. Mitchell had a second procedure, at the Mayo Clinic in Rochester, Minn., and also underwent platelet-rich plasma therapy, a procedure used by some NBA players, including the Lakers' Kobe Bryant.

And so, Mitchell made it through the early days of training camp drudgery, scrimmaged on Saturday and hasn't seemed to quit smiling.

"I wasn't ready for hockey to be over," Mitchell said. "I was OK with it being over but it's so out of your control. [Quitting] didn't cross my mind at all. I know we won a Stanley Cup but arguably that year was probably one of my best years of hockey I had as a pro.

"Any time you feel you are on top of your game and playing your best hockey, you're not ready to be done playing."

Lombardi noticed a major shift in Mitchell's demeanor during the summer. Instead of going home to British Columbia, Mitchell and his wife stayed in Southern California and he treated rehabilitation like a full-time weekday job while she attended culinary school.

"His whole attitude changed," Lombardi said. "He went from depressed and uncertain to being wired up. I think you see that now. I was talking to him yesterday, he's almost got that little-boy enthusiasm again."

Mitchell acknowledged as much in a long interview between practice sessions last week.

"I feel like I'm fortunate and in a good spot," he said. "I don't choose to see it as a bad spot, 'Like, hello, I'm back here.' On the ice with my teammates, full drills, everything. No issues, no problems.

"I'm in a good spot. Are you kidding me … compared to where I was before? Everything is here doing the same thing. ... I'm not going to say I feel like great out there yet. But I feel pretty darn good."

Mitchell is in the last season of a two-year contract extension, which was worth $7 million. And if he is healthy, the Kings could certainly use him on the ice.

Lombardi and Kings Coach Darryl Sutter are cautiously optimistic about Mitchell's return, although he did not play in the Kings' first exhibition Sunday. Sutter is taking a conservative approach and said he won't throw Mitchell into "the fire" immediately.

In the meantime, another vital defenseman, Rob Scuderi, departed, via free agency in July. Scuderi returned to his former team, the Pittsburgh Penguins. Mitchell is used to playing major minutes — he logged the second-most in the playoffs for the Kings in 2012, and he could go a long way in filling the void created by Scuderi's exit.

This isn't the first time Mitchell has faced a serious threat to his career. He suffered a concussion during his time with the Vancouver Canucks and only started to improve when he escaped to his cabin in remote British Columbia.

He handled his knee rehabilitation by taking breaks on the weekend, touring California with his wife. It got him away from the injury routine, and let them experience the best of the state, from tuna fishing in San Diego to Big Sur to Laguna Beach to a cooking class in Sonoma.

"I was a Cali guy, a Cali guy!" Mitchell said. "All the boys were joking around, 'Mitchy, where are you going this weekend?' "

Mitchell, smiling again, put it in perspective, saying: "Are we going to die or are we going to live? I'm living. Why not? It was a learning experience for me. I might have got caught in that vacuum. We're like, 'Hello, what's next?' "