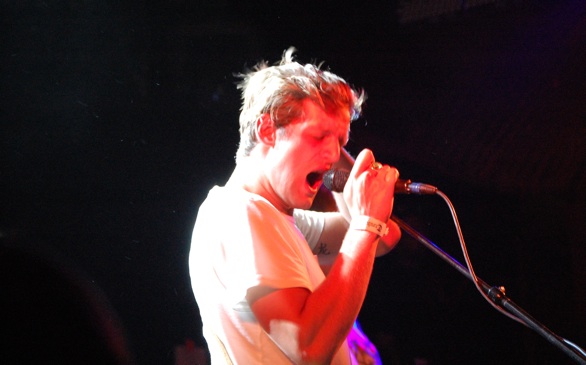 The Rubens are a four-piece band originally from Australia.
(Credit: Melissa Bobbitt)

It’s a family affair for the Margin brothers. It’s a harmonious thing when three siblings can tolerate one another, but these Australians take it further; one can see just how much fun they have together under the umbrella of the Rubens, their solid musical group that boasts Black Keys-like riffing and the sentimentality of ballad-rockers Keane.

Humbleness in a band goes a long way, and the Rubens had it in droves at the fabled Troubadour on Tuesday night. Lanky and hypnotic singer/guitarist Sam Margin took the time to extend utmost gratitude to the headliners Grouplove for having them on the road. The vocalist noted that pop-perfect songs like “Lay It Down” had hit big in his native country, but to be in the States was a dream.

The Rubens performed as if in a dream, one that started languidly and awash with soothing lights. Somewhere in the set, things turned into a chase scene as guitarist Zaac Margin attacked his instrument like he was trying to put out a fire. The furor aroused the sold-out venue.

Sam had the fortitude to address the audience on one particular song, “My Gun,” which might have been open to incorrect interpretation. He expressed confusion as to why Americans are so arms-obsessed and also lamented the recent Washington, D.C. Navy Yard shootings. He added that the Rubens don’t like violence (“usually,” he followed up cheekily) and that “My Gun” was actually a love song. Whatever its subject, the tune certainly had the crammed front row bobbing to the bluesy beat.

Perhaps the Rubens weren’t the best choice to team with the effervescent pop hippies Grouplove, but they held their own. One really can’t go too wrong with a band that’s opened for Bruce Springsteen and had their album produced by the mastermind behind the Strokes’ distinctive sound.

The Rubens is now available via Warner Bros. Records.