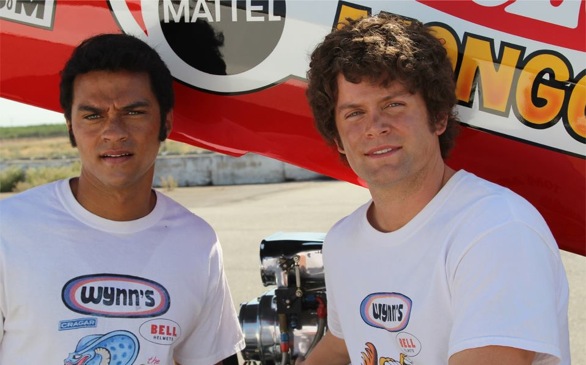 Starring Jesse Williams ("Grey’s Anatomy") as drag racing legend Don "The Snake Prudhomme and Richard Blake ("NCIS: Los Angeles," "Drop Dead Diva") as his friend and rival Tom "The Mongoose" McEwen, Snake & Mongoo$e takes a look at the heyday of the drag racing scene through the lives of these two characters. And characters they are.

Prudhomme is portrayed as standoffish, cautious and worried about everything and especially resistant to change or new ideas. McEwen, on the other hand, is shown to be a free-wheeling fun lover and self-promoter, readily available to his fans and very popular with the ladies. He sells T-shirts, signs autographs and even takes on the nickname "Mongoose" as a publicity ploy to draw more attention to his rivalry with Prudhomme (the mongoose eats the snake!), all with the intention of generating more income for both men.

Meanwhile, Prudhomme thinks it’s all a wasted effort, but when his wife (portrayed by Ashley Hinshaw) insists it’s time for the couple to have a baby, Prudhomme and McEwen finally form a business partnership to make some real money off, as they put it, “The Snake and Mongoose thing.”

After booking their own match races at $1,000 a pop, the pair scores a major publicity coup by getting a sponsorship from toy maker Mattel in conjunction with the burgeoning Hot Wheels line.

But as the money grows so does the tension; McEwen’s wife leaves him, the Prudhommes think McEwen is spending the partnership’s money too lavishly, and ultimately the two almost come to blows. When Mattel eventually drops the team, they go their own ways business-wise.

The film begins with the pair’s early days as rookie local racers in California in 1958, but most of the action takes place in the ’70s; championships are won, cars are wrecked, families struggle to stay together and tragedy strikes as one of McEwen’s sons dies. The fact that the pair’s friendship endures through it all is the real story here, but racing fans will love all the cars; there’s tons of footage of dragsters and funny cars in action, some of which is vintage film with the real "Snake" and "Mongoose" behind the wheel.