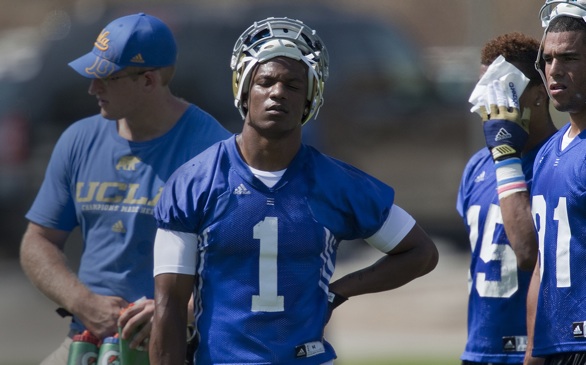 But Kiffin probably couldn't keep the Trojans from being distracted after UCLA receiver Shaquelle Evans made comments about USC during a radio interview on Wednesday.

Evans, who is from Inglewood, said "the tables have turned" in a rivalry that will be renewed Nov. 30 at the Los Angeles Memorial Coliseum.

"I'm from the 'Wood so all I hear is SC. 'Oh, when y'all play SC, they're going to beat you,''' Evans told ESPN-AM (710) in Los Angeles. "Beating them last year and knowing that we're going to beat them again this year, especially two years ago when they beat us 50-0, we owe them a little bit when we go to the Coliseum. Last time we were there, they embarrassed us. So this year we're going to try and embarrass them, honestly.

"It's so much fun ... just seeing them, they're  struggling, like how we used to struggle. Now, they're struggling. It's just awesome to see that. I hate 'em, so I'm just loving it."

Evans has nine receptions for 178 yards and two touchdowns. USC All-American Marqise Lee has 17 catches for 221 yards and one touchdown.

Asked who was the best wideout in college football in Los Angeles, Evans said, "I'm  going to have say me, right now, the numbers speak for themselves.

"I understand he has a little quarterback issue ... he's still a baller, but right now I'd have to say myself."

Evans remarks apparently got the attention of Lee and teammates.

On his Twitter feed, running back Silas Redd posted: