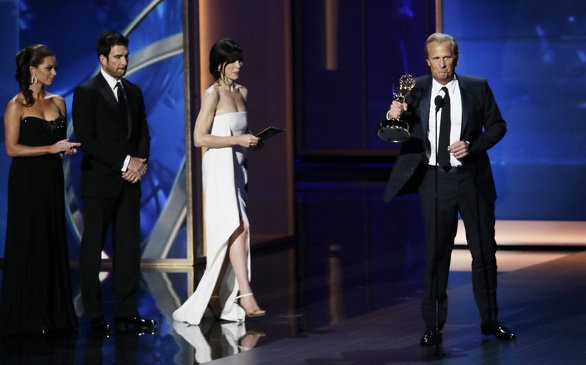 On Sunday night, the whole nation tuned in to watch the 65th Emmy Awards, anticipating which actors and shows would walk away with an award. Some of the winners were expected, but some threw most of us off.

For the Outstanding Actor in a Drama Series award, no one expected underdog Jeff Daniels, who plays an anchorman on the show “The Newsroom,” to win. Why was it such a shock? Well, he beat Kevin Spacey of “The House of Cards,” Damian Lewis of “Homeland” and Bryan Cranston of “Breaking Bad" - three top-notch actors from TV's three hottest shoes. This one shocked me at first, but after looking at the list, it could have been anyone’s game.

The Outstanding Supporting Actor award was also a shocker. The list included actors from three big hit shows: “The Breaking Bad,” “Game of Thrones” and “Homeland.” The award went to Bobby Cannavale of “Boardwalk Empire.” I truly thought Aaron Paul would have won the award. He did a fantastic job on “Breaking Bad,” but I had to remind myself that this is a supporting actor award  - not an award for the show itself. I’ve never seen “Boardwalk Empire,” so I can’t comment on Cannavale’s acting skills.

However, there was good news for “Breaking Bad”:  It won Outstanding Drama Series, beating out "Game of Thrones," "Downtown Abbey," "Homeland," "House of Cards" and "Mad Men."

Julia Louis-Dreyfus won Outstanding Lead Actress in a Comedy Series for “Veep,” and Tony Hale also won the Outstanding Supporting Actor award for the same show. I liked that they both played out their roles from the show on stage when Louis-Dreyfus accepted the award - it was hilarious.

For the comedy-variety show award, the 10-year winning streak for “The Daily Show With Jon Stewart” ended when “The Colbert Report” grabbed the award.

Jim Parsons won his third Emmy for Outstanding Actor in a Comedy Series for his role as Sheldon on “The Big Bang Theory.” Out of all the nominees, I found him the most funny, and his character is always entertaining! This award was not surprising at all.

For the Outstanding Supporting Actress award in comedy, Merritt Wever won for her role in “Nurse Jackie.” Her acceptance speech was short and sweet, literally. I thought it was great because it really threw people off. However, I thought Jane Lynch from “Glee” would have won this category.

Another favorite award of mine was the reality competition award. “The Voice” won, beating “The Amazing Race.”  I think that show really deserved this win because it’s so different in terms of how they judge; the judges listen with their ears before seeing the contestants, which is unique in reality competition TV shows.

When tallying up the numbers, who was the star at Emmy awards? It was Behind the Candelabra, which nabbed 11 awards, including Oustanding Miniseries or Movie award. Michael Douglas also won Oustanding Lead Actor in a Movie or Miniseries as Liberace in this film.

Personally, I wouldn’t call the whole night a complete upset. It was indeed full of surprises, but you have to give credit to some of the actors and actresses out there. My only bit disappointment: Neil Patrick Harris’ performance as the host. He did so well for the Tony awards, but he wasn't that great on Emmy night.