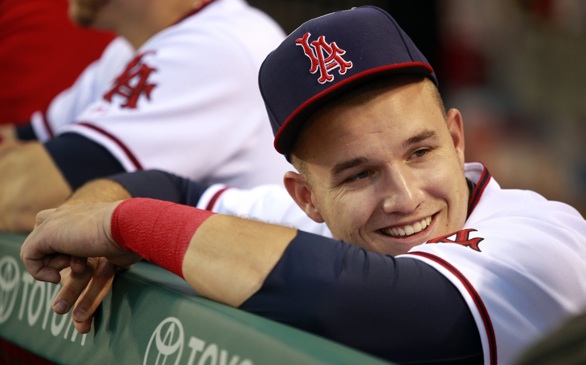 Angels outfielder Mike Trout laughs with a teammate in the dugout during a game.
(Credit: Allen J. Schaben/Los Angeles Times/MCT)

Mike Trout takes a vicious swing at a 91-mph fastball and an earsplitting crack echoes through the Tampa Bay Rays’ domed stadium. The drive screams off his bat at 112 mph and travels 458 feet, the longest home run this season at Tropicana Field.

Six days later, the Rays are in Anaheim and Trout hits a grounder that shortstop Yunel Escobar fields cleanly. Just about every other player in baseball would be out.

Not Trout. The Angels outfielder blazes to first in 3.85 seconds — nearly a half-second faster than average for a right-handed hitter — and beats the throw.

“His combination of speed and power is incredible,” Rays Manager Joe Maddon said. “He’s an anomaly, a prodigy.”

Two years into his big league career, Trout, 22, may be the best all-around player in baseball. A unanimous choice for American League rookie of the year in 2012, when he was runner-up in most-valuable-player voting, he produces in every facet of the game, hitting well over .300 with home run power, stealing bases and making highlight-reel defensive plays.

Around the Angels, Trout is the star who doesn’t act like one.

Around the working-class southern New Jersey town where he was raised, Trout is remembered as a kid so competitive that each morning he raced his two older siblings to the breakfast table. Not so he could brag — just for the satisfaction of being first.

He was called the “Millville Meteor,” a nickname still appropriate considering how quickly he has risen to the top of his sport.

In Millville, population 28,000, Trout is known even now as “Mikey,” the All-Star ballplayer who lives with his parents in the off-season and dates his high school sweetheart, a fifth-grade teacher. He shares family meals and hangs out with his buddies in his “man cave,” a basement room with two couches, a pingpong table, dartboard, bar and a 70-inch flat-screen television.

“Around his friends, he’s the same guy he’s always been,” said his agent, Craig Landis. “He likes to hunt, fish, golf. He’d prefer to do that than to hobnob at some Hollywood event.”

“Salt-of-the-earth people with solid backgrounds,” Angels Manager Mike Scioscia said of the Trouts. “Mike has had great mentoring in our clubhouse, but the most important reason he’s so grounded is his parents.”

Mike has a 24-year-old brother, Tyler, who recently graduated from law school, and a 27-year-old sister, Teal Levick, who is married with two children and runs a business from her family’s home. Jeff and Debbie tried to instill in their children the value of hard work, modesty and gratitude.

“My parents taught me to stay humble, don’t be too cocky, and that’s the way I’ve looked at it since Little League,” Mike said. “Go out there and play hard and don’t draw too much attention to yourself with your actions.”

He has appeared on the covers of Sports Illustrated, ESPN the Magazine, Men’s Health and GQ. He is recognized wherever he travels.

When the Angels were playing the Yankees in New York recently, Trout and several family members tried to sneak out the side of the team hotel. It didn’t work.

Several autograph-seeking young men spotted Trout and, pens and baseballs in hand, pursued his cab for 10 blocks. The stoplights allowed them to keep up until the taxi stopped at a Times Square eatery.

“They were chasing us through the city, knocking on the window of the cab,” said Debbie, Mike’s mother. “It was crazy.”

The men were rewarded when Trout signed after dinner — two hours later.

“They never let go,” Trout said with a chuckle. “You want it that bad, you get it.”

The cities, hotels and stadiums change, but the scene remains the same.

“It’s ‘Trout! Mike! Can you sign this?’” Angels slugger Mark Trumbo mimicked. “We’ll duck out to eat and when he comes out of the restaurant, he’s mobbed. It’s unrelenting.”

It’s the same back at home in the off-season. Trout will pop into a Millville grocery or sporting goods store and within minutes people appear with jerseys, baseballs, magazine covers and pens.

“We had people coming to our door on Christmas Eve with things for Mike to sign,” said Jeff, Mike’s father. “That was a little pushy.”

Trout says he enjoys the attention but acknowledges it can be overwhelming. “You want to be yourself, a guy who can go anywhere and not be bothered, but it goes with the territory,” he said.

The pitfalls of fame, fortune and youth have tarnished other players. Yasiel Puig, a 22-year-old Cuban phenom, has fueled the Dodgers’ surge to the National League West title, but his maturity hasn’t always matched his athletic prowess.

Puig was arrested for driving 97 mph in a 50-mph zone in Tennessee in April, and in late August, he was fined for being late for one game and pulled from another game because his manager said he wasn’t mentally prepared to play. Some of his demonstrative home run celebrations have rubbed opponents the wrong way.

There has been none of that with Trout. “There’s a fine line between cocky and confident. He’s confident but doesn’t cross over and appear cocky at all,” said Joe Nathan, the Texas Rangers’ All-Star relief pitcher. “That’s a credit to the (Angels) veterans over there and to his family, his upbringing.”

On the field, Trout’s playing style is reflected in the state of his uniform, which provides a nightly challenge for Shane Demmitt, the Angels’ assistant equipment manager.

“It can be a combination of dirt stains, grass stains, bloodstains — he’ll blow out a knee or a butt cheek,” Demmitt said. “He’s in the top two or three for most-soiled every night. He’s old-school.”

Trout will slide hard into second to break up a double play, or run into a wall and dive in the outfield. He usually slides headfirst into bases.

Trout could have complained and pouted when, after his big rookie year, the Angels renewed his contract for $510,000 — just $20,000 more than the major league minimum. Teams set the pay for players during their first three seasons in the big leagues, but although other clubs have tripled or even quadrupled the salary of a young star, the Angels took a hard line.

Trout shrugged it off. “You could easily put yourself in a bad mood about it, but that’s not me,” he said. “I like to play baseball. I’m going to try to win a World Series for the team and not worry about off-the-field things.”

Jeff said his son is about one thing: winning.

That’s the way it has always been. When Trout’s Little League teams won titles, Jeff recalled, “He was on top of the world. We came in second one year and he was miserable for a month.”

As the losses mounted for the Angels this season, Trout said he has focused on “getting all the negatives out of my head and staying positive.”

He’s put together another MVP-caliber season — his batting average is second-highest in baseball and a recent tear has him up to 26 home runs. But, Trout said, “I’d trade everything for a World Series ring. It’s what you play for, why you grind out the whole year, with all the bumps and bruises along the way.”

It’s the kind of comment people around baseball appreciate, whether they are fans, teammates or an old coach.

Maddon, who has been in professional baseball for 39 years, says he has never seen anyone quite like Trout. Asked to define Trout’s “ceiling,” a term used to describe an athlete’s maximum potential, the Rays manager leaned back in the visiting dugout at Angel Stadium, smiled and said: