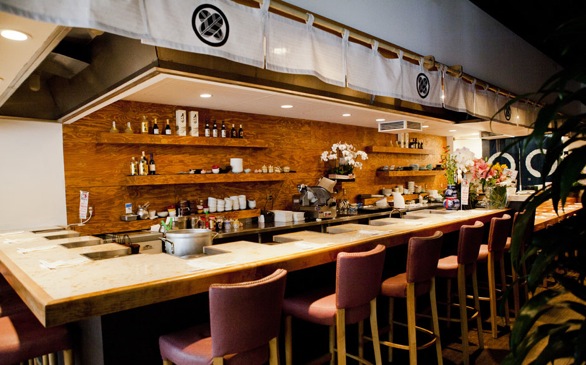 When choosing a restaurant there a few rules I abide by. The first: while half-priced sushi is a tempting mistress, it’s usually better to just pass. The second: avoid places that serve multiple ethnic cuisines.  You’ve seen them—“Do I go with the chicken tikka masala, the lasagna or the hamburger & fries?”  Invariably, all three will be bad or they’ll all taste suspiciously similar.

So, I was a little cautious when I was asked to review Osawa Shabu Shabu Sushi in Pasadena. Shabu shabu, which entails cooking thin slices of meat and fish and vegetables in a flavored broth, is one of my favorite dining experiences. It’s delicious, fun and social, like how fondue was in the ‘70s but without the flared jeans and partner swapping.

Sushi, of course, needs no introduction. It’s a cuisine that is also an art form, but how would it work combined with shabu shabu? I’m not sure about other places, but at Osawa, the result is a definite home run.

Upon entering Osawa, the host and sushi chefs greeted us warmly behind the counter. It’s a comfortable space with tables along the window and right side, and a good-sized sushi bar on the left. The restaurant is appropriate for a date night, dinner with friends or a single looking to satisfy his or her sushi craving.

The menu only takes up one page, which is a good sign; focus on doing a few dishes well, rather than a lot of dishes average. I believe Sun Tzu said that…or Bobby Flay (I get those two confused all the time).

Clearly, my lovely wife, Kristen, and I were going to have to sample both the sushi and the shabu shabu.  Before, however, why not peruse the appetizers and specials? We were so glad we did, otherwise we would have missed the shishito tempura stuffed spicy tuna with sweet soy. Shishito peppers are the best way to start off a Japanese meal (take that, edamame, you overrated legume!), and certainly stuffing it with spicy tuna and then battering and deep-frying it could not be a bad thing. The pepper was crunchy on the outside while the tuna maintained its creaminess on the inside. The sriracha from the spicy tuna and the seeds from the pepper gave the dish heat without being overpowering.

While I would order the shishito peppers again in a heartbeat, what will keep me coming back is the appetizer special: scallop dynamite. You may have had dynamite sushi before (it’s usually a California roll topped with a spicy mayo sauce and quickly grilled), but Osawa takes it to a whole new level. First of all, Osawa uses large scallops, not the smaller and chewier bay scallops. The larger scallop allows you to appreciate the mild flavor and succulent texture of the scallop. Meanwhile, the dynamite sauce is a creamy delight that balances tangy and spicy perfectly.

Kristen and I toasted our great selections with beer and sake, while awaiting the sushi and shabu shabu.  Would Osawa be able to deliver on its dual cuisine promise? Oh, yes, indeed it did.

When it comes to sushi, I’m more of a traditionalist; I prefer nigiri (fish on rice) rather than elaborate rolls because I want the fish and rice to shine through. Osawa does not disappoint, as the albacore tuna, halibut and salmon were, clean-flavored and melt-in-your-mouth delicious.

Now, with the sushi portion “checked off,” would they be able to deliver on the shabu shabu portion?  I would say yes and no.

There is a choice of rib-eye, prime rib-eye, pork, salmon or wagyu beef (at $89 a plate!)  We went with prime rib-eye, which has a good ratio of lean meat to fat. Swished in the flavorful broth for a matter of seconds (for rare), the rib-eye took on the broth flavor while retaining its buttery texture.

Where things went a little off the rails was with the vegetable component of the shabu shabu. It included the usual shitake mushrooms, udon noodles and assorted vegetables. However, for a green instead of spinach, which I’m used to, they used chrysanthemum greens. Perhaps this is a more traditional approach, but the flavor of the greens was very flowery and overpowered the rest of the ingredients.

Desserts are available, but we barely had room for it, as you can imagine.

I’m pleased to say Osawa has made me reconsider my firm stance on multiple cuisine options. The trick is to just make sure to do them well, as Osawa does.