Getting Weird with Panic! at the Disco: The pop-rock giants go back to their roots on the new album. 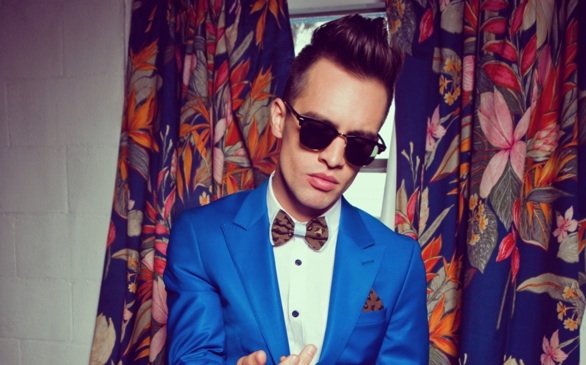 Brendon Urie is the lead vocalist, guitarist, pianist and singer-songwriter of Panic! at the Disco.
(Credit: Alex R. Kirzhner)

He’s standing in the middle of the desert, in the midst of some odd Burning Man-like ritual where a bird-woman is sacrificed. He’s brandishing a gnarly machete, but darn if his hair doesn’t still look good. He’s rattling off Janet Jackson lyrics and running from (toward?) some unseen enemy. He’s got the fear, but he’s fighting instead of flying. He’s using it to his advantage. He’s going home.

He is Panic! At the Disco’s sole survivor.

The above scenario isn’t real— it’s taken from the bizarre plot of the “Miss Jackson” video, the first single off Panic!’s new album, Too Weird To Live, Too Rare To Die! (Decaydance/Fueled by Ramen). But Urie’s solitude is truthful.

Since Panic!’s heyday as emo superheroes in the mid-aughts, all of the original members except the dandyish singer/multi-instrumentalist have flown the coop. Drummer Spencer Smith contributed to Too Weird, but he declined to join the promotional tour to focus on maintaining his sobriety. (Smith completed a stint in rehab just under a year ago to deal with alcohol and prescription medication addiction).

Urie is undergoing some soul-searching of his own on Too Weird, the first album from his band since 2011’s Vices & Virtues.

“Therapy for me is kind of using my music as a disguise for a confessional,” he said in a recent phone interview. He noted that the hit single “Miss Jackson” approaches the subject of infidelity and seeing both sides of it now that he’s happily married.

Why does he feel the need to air this dirty laundry now?

“I don’t ever like to dwell on it, so I think for me it’s cathartic in a way to be able to describe a memory as I saw it, from years past,” he said. “When talking about ‘Miss Jackson,’ that happened almost a decade ago. It still haunted me for so long. Now that I’ve written it and it’s out there… it doesn’t really haunt me anymore. It’s kind of a nice thing.”

He’s also no longer running from his Las Vegas upbringing. The youngest of five in a Mormon family, Urie long shunned the dogma, as well as the gauzy neon of the Strip. There is no denying that Panic!’s flair for the dramatic was influenced by Sin City (remember the over-the-top electronic circus that was A Fever You Can’t Sweat Out?). But the now 26-year-old is gladly copping to that muse.

In fact, this album culls its name from a line in Fear and Loathing in Las Vegas, by the original gonzo journalist and author, Hunter S. Thompson. The Panic! front man was watching the psychedelic film prior to naming the album and had a breakthrough.

“Hunter S. Thompson is so iconic and is such a character,” Urie said. “I felt that’s what this record was. I felt it was a character record, playing off a couple of different themes. But one central theme is just getting back to our roots, growing up in Vegas.”

Produced by Vices helmer Butch Walker, Too Weird puts its money where its mouth is when it comes to celebrating the band’s hometown. There’s the upbeat “Vegas Lights,” the seedy “Nicotine” and the cheeky “Girls/Girls/Boys.” And whereas the theatrics flourishes are still there, Panic! has also veered more into themainstream, employing Auto-Tune on album opener “This Is Gospel.”

And though Urie is a bona fide rock star, he keeps it humble. You can see his puppy dog-like excitement in an Instagram video when “Miss Jackson” comes on his car radio. Plus, the recent tour Panic! hits up tiny venues around the country— some so intimate that the singer says he’d be perspiring on the front row’s fans.

“This tour, [there were] really intimate shows in smaller clubs, which we hadn’t done in a little bit, so it’s really nice to be able to do that,” he said. “It’s so different from an arena show that we’re going to be playing with Fall Out Boy. You’re right in their face; sometimes there’s not even a stage. You’re at the same level as your fans. You get this different connection you kind of miss out on when you play bigger venues.”

Speaking of Fall Out Boy, whose Pete Wentz is credited with discovering Panic! at the Disco way back in 2004, that punk-pop group remain great friends with Urie. Panic! will be opening for them on the aforementioned arena tour this fall, and a few of the Fall Out Boys attended Urie’s 2013 nuptials to Sarah Orzechowski. (She’s the subject of Vices’ “Sarah Smiles” and Too Weird’s love song “The End of All Things.”)

It seems that things have come full circle for Urie. He was the last original member to join Panic! at the Disco, and now he’s the one carrying their torch. That inner flame the musician possesses has seen him through trying times and has now brought his heart back home to the desert he once wanted to flee.

Too Weird To Live, Too Rare To Die! is out worldwide Oct. 8 on Decaydance/Fueled by Ramen.

Interviews
Benny Blanco on his new song with Juice Wrld: 'It's hard to listen to now'
279 views

Interviews
Jewel reflects on her 1995 debut album, which sold 12 million copies and changed her life
599 views

Interviews
Shamir used to be an ‘accidental pop star.’ Now, the Philly indie rocker has come into his own.
434 views

Interviews
John Legend has released an album about love as the world convulses with anger.
522 views