Food Gets an Attitude in Cloudy with a Chance of Meatballs 2: Bill Hader, Anna Faris share the juicy details. 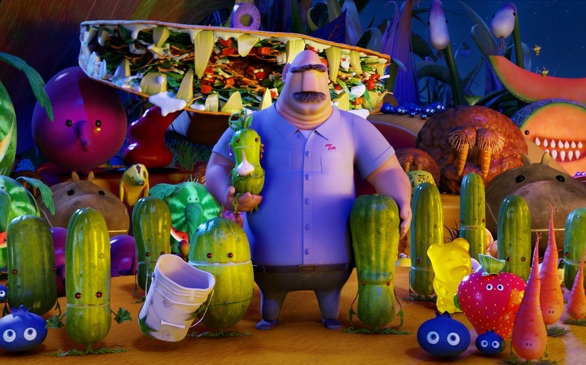 Ever wondered what goes into making these “foodimals”? The creators and cast answer your questions!
(Credit: Courtesy of Sony Pictures)

You’re cleaning up after another wild dorm party, and there you see it— the lone leftover piece of pizza that looks so funky that it may very well be alive. You poke it with a fork… and it growls at you. It is alive! And so are the killer tomatoes in the salad you forgot to throw out. And the spilled milk under the table is starting to follow you around the room…

That’s the idea behind Cloudy with a Chance of Meatballs 2, the sequel to the 2009 movie that turned good eats into crazy weather. Set a minute after that film wrapped, the second chapter sees the heroes of Swallow Falls battling all new foes— sentient food like the menacing Tacodile Supreme and the hairy, scary Cheespiders.

It’s a fun, imaginative flick that you can enjoy with your younger siblings. In fact, during a recent press junket, the creative minds behind the story led a crafts session in which real-life veggies were turned into “foodimals.” Even the grown-ups had a blast sculpting ordinary cucumbers and bananas into smiling anthropomorphic pickles and Bananostriches with the aid of a few decorative pushpins and pipe cleaners.

Benjamin Bratt, who voices Manny, a Jack-of-all-trades cameraman, assured that the Cloudy movies are perfect for children of all ages and for those young at heart.

“I think it was just really cool to see adults embrace the film with equal zeal as kids. Everyone, whatever the age is, they accept what the parameters of what reality is within the film, and it gets pretty outrageous at times. It’s a very zany, fun ride to go on.”

That zaniness is all thanks to inventor Flint Lockwood (voiced by “SNL” alumnus Bill Hader), who in the original film created a device that turned water into food. After seemingly destroying the machine for the better of his hometown, it’s discovered the machine is still operating and is turning the food into living creatures. A Steve Jobs-like tech guru named Chester V (voiced by another “SNL” grad, Will Forte) sends Flint on a solo mission to contain these foodimals.

Though the last movie painted Flint as a loner, he eventually made a horde of caring friends, and they’re once again at his side in the sequel. Anna Faris reprises her role as newscaster Sam Sparks, Flint’s main squeeze and No. 1 supporter.

“Sam has become a little more of an understated leader,” Faris said. “I think that she attempts to guide the group to a practical, logical place.”

This is a tough call to action, considering the outlandish scenario. (Also onboard for the culinary adventure is the chicken-suited Brent, voiced by yet another “SNL” cast member, Andy Samberg; police officer Earl, brought to life by Old Spice ad guy Terry Crews; and Flint’s dad, Tim, voiced by the stately James Caan.) Where does logic fit in when the colorful bunch is being tracked by alien life forms such as the Hippotatomus and the Buffaloaf? Talk about “Kitchen Nightmares!”

Directors Cody Cameron and Kris Pearn, who worked on the animation of the prior film, noted that this script pays homage to monster movies like Jaws and Aliens. But for the ultimate suspension of disbelief, Bratt credited another fantastical classic.

“Kids dug Jurassic Park, and there’s an element of Jurassic Park in it, too. Once they enter this world of these food hybrids, they don’t know what awaits them around the next corner. I mean, Shrimpanzee?” (A Shrimpanzee is exactly what it sounds like— part primate and part crustacean. There’s another great ape in Cloudy 2, a hyper-intelligent orangutan named Barb, voiced by Kristen Schaal from “30 Rock,” who helps Chester V in his lab.)

To create such an immersive, far-fetched environment, Pearn and Cameron, as well as hundreds of animators, brainstormed on about 200 foodimals. The directing duo welcomed suggestions from all: even Faris offered up ideas, like the Cornicorn, a mythical horse-and-maize combo that didn’t make the final cut.

Then, they pared down the ones that would photograph well (the Broccolion was ultimately nixed because cruciferous vegetables are too difficult to recreate digitally). Finally, they sought to invent a variety of Swallow Falls inhabitants— everyone from the sweet little strawberry named, well, Barry, to the gigantic brontosaur-like Wild Scallions.

Amid all the wacky foodimals is a touching and charming script by John Francis Daley (co-star of “Bones” and writer of “Horrible Bosses”), Erica Rivinoja and Jonathan Goldstein. The peril of taming the food-infested island is central to the plot, and so are the tenets of companionship, Hader said.

“The second movie is bigger in scope. [It has] a lot of really great, silly characters. But it also has a message of sticking with your friends.”

It’s a positive message to adhere by, even when your friends are literally sour pickles.

Cloudy with a Chance of Meatballs 2 takes a bite out of theaters Sept. 27.