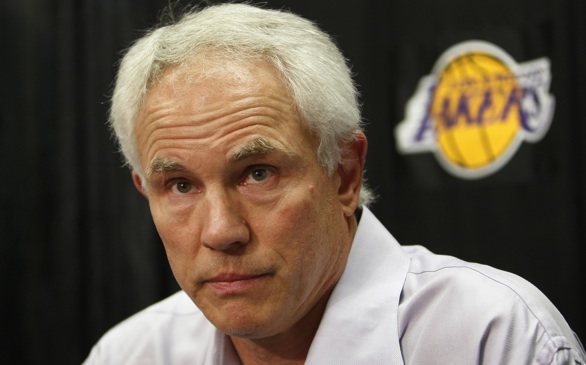 Kobe Bryant hasn't played basketball since hobbling off the court on April 12, a torn Achilles' tendon ending his season and the Lakers' already-slim chances of doing any playoff damage.

Naturally, General Manager Mitch Kupchak faced a flood of questions about Bryant on Wednesday as he spoke with reporters.

First and foremost: "There have been no contract extension talks," Kupchak said.

Kupchak said he would eventually meet with Bryant and his agent to discuss a "road map for the future."

"Kobe's made it clear that he intends to retire in a Laker uniform and I know as an organization we feel the same way," Kupchak said.

But will Bryant take less money to allow the Lakers to sign more free agents next July?

"It's kind of speculative to think what a player may do," Kupchak said. "Quite frankly, I don't know what his expectations are, so I'm just not going to go there."

Even if Bryant takes a drastic pay cut, there's no guarantee the Lakers can attract top-name free agents. Kupchak warned against looking ahead to next summer, when a slew of players could become free agents, including LeBron James and Carmelo Anthony.

"I think it is a little bit dangerous only because of the rules that have been created in the new collective bargaining agreement," he said. "It's going to be tough to get players to move. It really is.

The Lakers begin training camp Saturday in El Segundo. Bryant will be only an observer. There is no timetable for his return or idea what he will look like.

"Some guys, like myself when I hurt my knee, I always had a limp. You won't be able to tell [with Kobe]," said Kupchak, a rough-hewn power forward in his NBA playing days. "But he is 35 and his game has been evolving anyway in the last two or three years."

And when he does return to the court?

"When he does come back … and we're down by two or we're down by three, the Kobe that we know and love is going to take the last shot," Kupchak said. "He may be limping and he may be dragging his leg but he will take that last shot."

Kupchak wasn't thrilled about Bryant's recent jump from a high-dive platform into a pool, which Bryant posted online.

"He got out of the water and he looked like he was healthy so I felt good, [but] that was not great judgment," Kupchak said.

And yes, there are also other players on the Lakers' roster.

Steve Nash seems further ahead of Pau Gasol in successfully returning from injuries.

Nash has taken part fully in unofficial scrimmages for at least a month, apparently fully recovered from a broken bone and nerve damage in his leg that hounded him last season.

But Gasol hasn't been on the court often since undergoing a procedure in May to decrease tendon pain in his knees.

"Like with all veterans, we're going to bring him along slowly," Kupchak said.

Gasol, like Bryant, is in the last year of his contract. He will make $19.3 million.

"My understanding was that the book or the comments were made a year ago but [it's] completely understandable why she would feel the way she did," Kupchak said Wednesday. "I get it completely."

But Kupchak also reiterated his support for D'Antoni, who enters his first full season with the Lakers after being hired unexpectedly a few weeks into last season.

Of course, everything seemed to come back to Bryant.

How will he behave if he's sidelined for a while? How will he interact with teammates and the coaching staff?

A small sample was given last season when Bryant took to Twitter during the Lakers' playoff opener. He was critical after a 91-79 loss to San Antonio, saying the Lakers needed to go to the low post more often. At the time, D'Antoni rolled his eyes.

Said Kupchak on Wednesday: "No coach has been able to control Kobe. No coach we've had since 1996. And that's not going to change."