USC Fires Lane Kiffin: Why and What's Next for the Trojans? 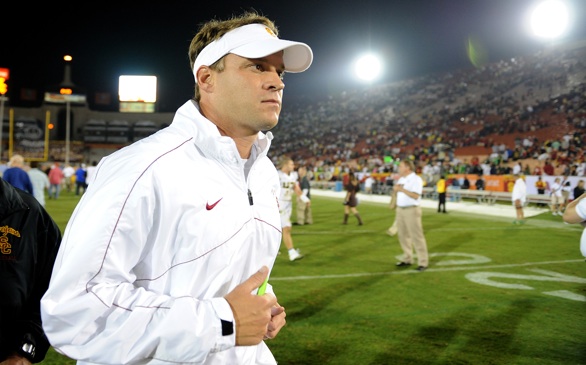 After a disappointing 62-41 loss against Arizona State, University of Southern California athletic director Pat Haden followed his gut and fired football coach, Lane Kiffin. After suffering another loss, making the Trojans 3-2, it wasn’t a surprise that Haden let Kiffin go; many fans and alumni felt the coach wasn’t fit to carry on.

However, despite the losses and controversy, Haden had always been supportive of Kiffin. He even defended Kiffin when everyone else was in doubt. But, apparently that is not the case anymore.

Kiffin’s career was short-lived just as his previous positions; they lasted only a few years. It was just a matter of time before Kiffin’s role as the Trojans' football coach came to an end.

In 2010, Kiffin was chosen to take over for coach Pete Carroll, who left to coach for the NFL. Kiffin’s first year ended with an overall record of 8-5. Then it got better in 2011; the Trojans ended the season 10-2. But at the end of 2012, USC came out 7-6, causing an uproar among the fans and alumni. This year, USC had a great start with its win over Hawaii, but the team lost to Washington State during the home opener. After this game, the fans were fed up and kept chanting "Fire Kiffin!"

During his time as USC's head coach, Kiffin definitely worked under tough conditions. In 2010, USC had to endure NCAA sanctions, including the loss of 30 scholarships and a two-year bowl ban, thanks to the Reggie Bush scandal and the works of Carroll and former USC athletic director Mike Garrett. Haden was hired to replace Garrett and had to clean up the mess that was left behind. With Kiffin, USC played with 56 scholarship players, which is less than the NCAA maximum of 85 scholarship players.

On top of the bans and sanctions, Kiffin was allegedly involved in some sketchy and perhaps unethical situations. The PAC-12 reprimanded USC for underinflating footballs before a game against Oregon last year (a game USC lost, by the way). Kiffin was also suspected of switching jersey numbers to confuse opponents. Ever since these accusations, Kiffin started to lack transparency.

On top of the repeated losses, none of these actions sat well with the fans and alumni. So on Sunday, Haden met with Kiffin at LAX after the team flew in from Arizona. After 45 minutes, Kiffin was off the team. The rest of the team was notified about Kiffin's firing via text message that night.

With Kiffin out, the search for a permanent coach is on. There are a few names on USC’s potential coach list: former Trojan offensive assistant Steve Sarkisian, Vanderbilt coach James Franklin, Denver Broncos defensive coordinator Jack Del Rio and San Francisco 49ers offensive coordinator Greg Roman. The decision to replace Kiffin has yet to be decided.

Until then, Ed Orgeron has taken over as interim head coach with eight more games left in the season for USC. Haden hopes Orgeron will bring back the fun into the games and get the Trojans going as he searches for a permanent coach.