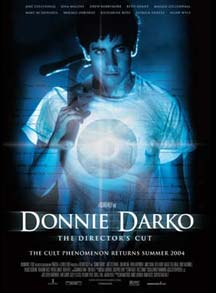 When Donnie Darko hit theaters in 2001, no one seemed to get it. The film has since gone on to become a cult classic, spreading like news of a broken water main on a hot summer’s day, even though the apocalyptic opus has only been out for three years. Donnie Darko, which follows 28 days in the life of a 1980s teenager through his encounters with a 6-foot-tall rabbit and experimentation with time travel, touches a nerve with anyone who knows what it’s like to try to find themselves in a world that refuses to understand them. Which is, in essence, everyone.

The new Director’s Cut version of the film adds layers to the already complex story, fleshing out characters that already seemed as full of life as they possibly could be. Jake Gyllenhaal’s performance as Donnie is haunting and provocative, capturing the angst of his age and the era with a signature look — there’s something not quite right deep in his eyes. He emits a certain sense of anxious energy, even when he isn’t under the pressure of knowing the world is soon coming to an end. Also notable is the performance by real-life sister Maggie Gyllenhaal as his cinematic sister Elizabeth.

The real star of this new cut, however, is the added effects, which bring into sharp focus the intricacies of Donnie’s descent into madness (or is it sanity?). From the added renderings of what time travel can do to a person, to the graphics of crystal blue eyes morphing into wormholes, Donnie Darko: The Director’s Cut promises something for every viewer — at least any that want to have their eyes opened. But make sure to pay special attention when "Frank" tells you to "Wake up."