Jennifer Aniston: The Actress Ends a Tough Year With Rumor Has It 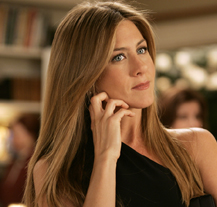 Appearing tan and fit in blue jeans and a sleeveless, black sweater top, Aniston was at the Ritz-Carlton Huntington Hotel & Spa recently to promote her latest movie, Rumor Has It.

Aniston plays Sarah Huttinger, an aspiring journalist who discovers that her family was the inspiration for the novel, The Graduate. The romantic comedy also stars Shirley MacLaine, Mark Ruffalo and Kevin Costner.

Aniston says she signed on for the role because she wanted to do something light and fun.

"It was the first job after ‘Friends’ so I felt it was a nice little delicate step out of the nest. It wasn’t that complicated and I also really thought, as far as these romantic comedies go, this was interesting; to have The Graduate as a backdrop," she says.

Last year Aniston fell under intense media scrutiny when her marriage to Brad Pitt ended in divorce. Aniston has stayed relatively silent about what has been written in tabloid and entertainment magazines and for the most part has emerged unscathed and with more public support than ever.

"I don’t think success has anything to do with making me secure with my life. I think my personal, emotional experiences give me the ability to be more secure with who I am," Aniston says. "I’ll tell you, at this point, there’s such a freedom in a weird way. You can just say, ‘Here I am. This is it.’ It was like I was saying to Shirley today, ‘Well, I might as well pull my pants down at this point. They’ve seen everything else.’"

Aniston was going through her separation during filming of Rumor Has It and her professionalism impressed MacLaine.

"She has come through what must be one of the most painful and difficult requirements of any human being, much less a young person; to live their life in a spotlight like this is so painful," MacLaine remarks. "And I’m really proud of her for the way she is handling this and also to be an icon, if you can be one at 36, of what to do when you get trampled in public. Her emotional discipline is extraordinary and I really want to compliment her for that."

Aniston credits her mother, who indirectly showed her how not to behave after a divorce.

"I watched my mother be very bitter and very angry throughout a divorce and never let it go and waste the whole second half of her life. So, I thank her for that unconscious sacrifice of what not to do. I think accountability, taking responsibility and not playing the victim [are also important]", Aniston says.

"That’s the real lesson that she’s teaching everybody," MacLaine adds. "She says so in public and certainly in private, ‘Where is my role in this? How have I contributed to this?’ ... in a very spiritual way instead of blaming and that’s a huge step and really hard."

When it comes to choosing her next projects, Aniston says she goes by her gut reaction to material. "I don’t strategize and say, ‘Well, I’ve done this. Now I have to do one of these next’. If it’s good and I think I can do it well, then I’ll do it," she says.

Aniston’s next movie is a smaller independent called Friends with Money in which she plays a pot-smoking maid who is the least motivated among her highly successful friends.

"I’m the youngest of the group and everybody’s sort of married and evolved in their lives and I’m pretty much the drifter … and it’s about how we deal with relationships and how money will affect friendships," Aniston describes.

The movie also stars Catherine Keener, Francis McDormand and Joan Cusack. Friends with Money is written and directed by Nicole Holofcener, who did Lovely & Amazing and will screen at Sundance next year.

"Nicole Holofcener is such a good writer. She captures the human spirit so well on the simplest level," Aniston says.

Rumor Has It is currently in theatres.
Article posted on 1/9/2006
This article has been viewed 3452 times.