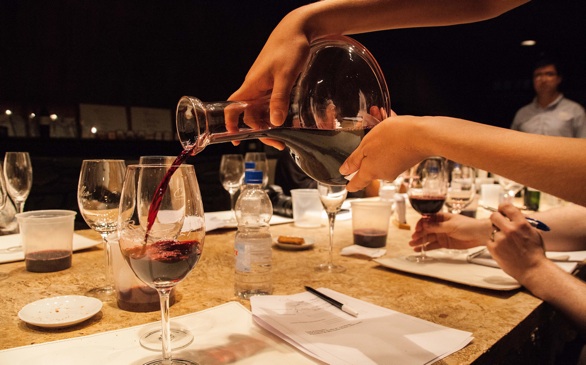 Wine has been become more popular in America, catching up with beer.
(Credit: Stever Haggerty/MCT)

Everyone has their poison: is yours beer or wine?

According to data in 2011, people altogether consumed 189 billion liters of beer worldwide, whereas people collectively only drank 24 million liters of wine. However, these numbers can be misleading.

It has been reported that wine is steadily gaining in popularity, especially in the United States and as well as in China. As for beer consumption? Well, it's sliding down in traditional markets and has even experienced an all-time low in (gasp!) Germany.

Whether you're a sophisticated wine drinker or a down-to-the-barrel beer enthusiast, you'll be surprised by these facts in the beer vs. wine battle:

2. Czech Republicans drink the most bottles of beer per year (a person will drink about 346 bottles a year; an American drinks 216).

3. Those in Vatican City drink the most bottles of wine per year (a person will drink 365 bottles a year - that's one bottle a day! An American drinks 63).

5. On the top-selling wine list, 8 out of the 10 wines are either from Australia or California.

6. Wine is reportedly good for the heart, reduces the risk of diseases and prevents sunburns (but really, though).

7. Beer has health benefits, too: it helps make stronger bones, it's a vitamin booster, it's easy on the kidneys, and it guards against carcinogens.

For more interesting facts on Beer vs. Wine, click here.

Blog
Lanea Celebrates Easter with "All You Can Eat Breakfast & Brunch Tacos for $25, Mimosas/Margaritas!
1,821 views