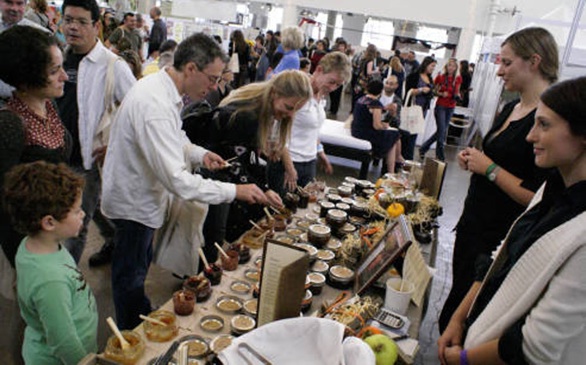 Artisanal LA will is an event where you can learn all about artisan food and products!

Campus Circle: When and where did the idea for Artisanal LA first come to mind? Whose idea was it?
Shawna Dawson: In 2010, when the artisan food movement was just beginning to bubble to the surface, I thought it would be great to create an event that showcased what was happening with our burgeoning local food scene. At the time, there were numerous craft-related maker events, but nothing that really focused on food, food related products and the makers and stories behind them. We hosted our inaugural event downtown, the October 2010 Artisanal LA Fall Show, and are ecstatic to be back downtown this year.

CC: On Artisanal LA's website, it says that, "partial proceeds of all of our events support local charities." Which charities are supported by some of these proceeds?
SD: In the beginning, we took a portion of our proceeds and donated to local charities, including local school farms and food banks. As the event has grown, we've shifted the focus to be about supporting our artisans and makers.

Because we're determined to take down barriers to entering the market for lesser known artisans and those who may be bringing their product to the public for the first time, that means keeping booth fees and costs substantially lower than any similar even, and the economics of this event can be challenging. We've reworked our event model so that we can sustainably support and help nurture the local maker movement.

CC: How has Artisanal LA grown since its first event in 2010? Have many vendors, workshops and panels been added?
SD: As the artisanal community has grown, so have we. When we started out, we had about 70 vendors at the show...and we had to search under lots of rocks to find them! This year, we planned to feature 150 vendors, and we ended up with 178 in addition to nearly 40 more hosting demos, book signings and workshops.

CC: What new vendors, workshops or panels will be featured at Artisanal LA this year?
SD: We've also expanded this year to officially feature both home goods and edibles since the two so naturally go hand in hand. And one of the other new industries you'll see at this year's event is the Cottage Industry. We have also expanded our vendors to include artisans throughout the United States, not just Los Angeles. We have great jams coming in from Brooklyn, 4505 Meats coming in from San Francisco alongside other makers from around the country.

On the programming side, we now have an entire floor devoted to education and workshops (the 11th floor Maker City LA), including nearly 40 workshops, demos, panels and book signings.

I hope the event, and especially all of our programming, inspires attendees to rediscover the simple pleasure of making--be it a wooden spoon, a loaf of bread from a starter, something as simple as their first jar of jam, or as lofty as bringing beehives into the backyard. All of which you can learn about at the event!

CC: Do you or any other members of the group that organizes Artisanal LA specialize in or sell anything at Artisanal LA? I heard that that Sauce LA is one of their businesses, so are they featured at Artisanal LA? If yes, please explain.
SD: My company is Angeleno, Inc. and under that umbrella we operate Sauce LA, a boutique marketing and PR firm that specializes in restaurants, chefs and hospitality; the LA Street Food Fest, another event I founded; and Artisanal LA.

CC: Is there a plethora of free samples at Artisanal LA?
SD: Since you'd likely be seeing them for the first time, most of our vendors sample their products.

CC: On Artisanal LA's website, it mentions a Best Booth Contest in which the winner will receive a complimentary booth at the next Artisanal LA. How competitive are the vendors in winning this prize?
SD: Given my marketing background, we spend a lot of time talking about the value and importance of brand, so I'd say our vendors are more inspired than competitive. And the things they come up with always inspire us too.

CC: Which famous faces have been featured in or appeared at Artisanal LA?
SD: The foundation of this event has always been grassroots. My background is grassroots and viral marketing and so before we had any kind of budget for advertising, we relied entirely on word of mouth to spread the word. It never ceased to amaze me how many people would show up and how many celebs would hear about and find their way into the event to enjoy a day of shopping, learning and hanging out with family and friends, just like everyone else. We've spotted Julia Louis Dreyfus, Marisa Tomei, Ty Burrell, Tori Spelling and others at past events.

CC: Other than Artisanal LA and LA Street Food Fest, do the ladies of Sauce LA have any plans for expansion, opening up new restaurants, or organizing new events in the future?
SD: We always have thing, or three, up our sleeves!

Artisanal LA is taking place from Oct. 12-13 at the LA Mart in Downtown Los Angeles from 11 a.m. to 6 p.m. For more information on this event, click here.

*Presale tickets are only $12 online. Tickets cost $15 at the door. To purchase tickets, click here.