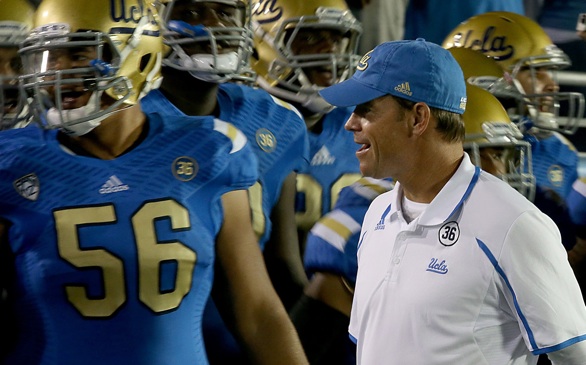 SALT LAKE CITY -- If nothing else, UCLA avoided rough weather.

An hour or so before Thursday night’s kickoff, snow swirled over Rice-Eccles Stadium for five minutes before quickly giving way to sunshine. Almost immediately after the clock ran down on the Bruins’ 34-27 win over Utah, the sky again turned white.

A bit of serendipity, perhaps.

There was much of that for the Bruins on the field, even in a messy effort that saw the loss of multiple starters. Before a sellout crowd of over 40,000 black shirts, they preserved a perfect record and a precious 1-0 start to Pac-12 play.

After blowing out three teams by 104 combined points to start the season, UCLA’s offense slowed. It had 404 yards of offense to Utah’s 387, but wasn’t nearly as efficient as it had been in prior weeks. Entering the game with a nation-leading 68.29 percent success rate on third downs, the Bruins (4-0) converted just 7 of 19 opportunities.

Kicker Ka’imi Fairbairn gave UCLA a 27-24 lead at 8:28 in the fourth quarter with a 47-yard field goal. His team would not lose it.

Defensive back Anthony Jefferson grabbed his second interception of the game with a little over four minutes left, bringing UCLA’s total up to five. That set up the team’s final scoring drive, capped by Brett Hundley’s 36-yard run on a quarterback draw -- a play the quarterback called. He finished with 211 passing yards and a touchdown, adding a touchdown catch too.

Down 10 points, the Utes (3-2, 0-2) moved down the field enough for kicker Andy Phillips to knock one in off the uprights from 37 yards out, making it a one-score game with two minutes to go. They put in one last scare with a fumble recovery with 1:59 on the clock.

The Utes took over near midfield. Wilson took a sack to set up 4th-and-6, but he completed an 11-yard pass to Anthony Denham to keep his team’s hopes alive.

A few plays later, linebacker Myles Jack jumped in for UCLA’s sixth interception of the game.

“We had way too many mental errors, but ultimately they were my fault,” said Wilson, who had only thrown three picks on the season before Thursday. “Some were deflected, some were off receiver’s hands, but it happens so we just have to keep on playing.”\

The Bruins had opened the game with a quick, 10-play touchdown drive, but was hampered by numerous errors all night long. Center Jake Brendel’s snaps flew consistently low, skidding several yards back on one play.

Hundley lost much of his vision momentarily in the third quarter. When he returned a few plays later, he didn’t look quite the same, eventually throwing an ugly pick in the fourth quarter that allowed the Utes to tie the game at 24 with 13 minutes to go.

He appeared fine afterward, but said he wasn’t sure what caused him to start seeing double. The trouble began when he was knocked down and hit his head against the turf. His vision returned gradually, and he said he could see just fine when interviewed post-game.

The redshirt sophomore had started the game brilliantly, but needed a gritty, pock-marked effort against a fierce Utah blitz. He ran for 85 yards, scrambling out of tough situations as the clock wound down.

And he did so without the benefit of one of UCLA’s surprise stars.

Junior tailback Jordon James -- who entered the game as the nation’s fifth-leading rusher -- hobbled off the field late in the first half, injuring his ankle after notching 39 yards and a touchdown. The Bruins slid in backup Paul Perkins, a redshirt freshman who was Hundley’s high school teammate.

He finished with 92 yards on 16 touches -- alleviating some concern for the team should James’ injury prove to be significant. Mora said James had X-rays done, but was uncertain about the diagnosis.

More serious is the condition of left tackle Torian White, who is out indefinitely with a broken right ankle. Simon Goines shifted to the spot for the rest of the game. Offensive line coach Adrian Klemm said All-American Xavier Su’a-Filo could also slide there if necessary, but preferred that the junior stay at left guard.

An uneven but effective performance by the defense kept the game close. It sacked Wilson three times, and took advantage on a number of tipped balls. UCLA snatched three of its six interceptions in the third quarter.

Wilson, the Utes’ most promising quarterback in years, had started the game 7 of 9 for a pair of touchdowns in the first quarter. By the end, the 6-foot-7 sophomore was just 22 of 44 with 288 yards. He did not find the end zone again.

Bruins safety Randall Goforth could have had one more pick, but allowed one to slip through his hands for one of those first-quarter scores. That strike from Wilson to receiver Sean Fitzgerald gave the Utes a 14-7 lead.