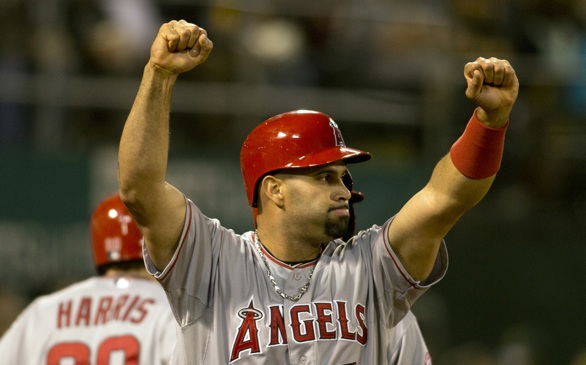 Angels slugger Albert Pujols followed up on his threat of legal action against former St. Louis Cardinals star Jack Clark, filing a suit in Missouri on Friday over comments Clark made accusing Pujols of using performance-enhancing drugs. The St. Louis Post-Dispatch first reported news of the suit on its website.

Clark, who began working as a sports-radio talk show host at WGNU-AM in St. Louis in early August, said he based his accusations on conversations he had with Chris Mehlfeld, Pujols’ former personal trainer who worked with the Dodgers when Clark was the team’s hitting coach in 2000.

When on-air partner Kevin Slaten said he long believed Pujols “has been a juicer,” Clark jumped in with his own take.

“I know for a fact he was,” Clark said. “The trainer that worked with him, threw him batting practice from Kansas City, that worked him out every day, basically told me that’s what he did.”

Pujols angrily denied the accusations, calling Clark “irresponsible and reckless.” His suit, a copy of which was obtained by The Times, claims the statements are lies that have damaged Pujols’ reputation, causing him personal humiliation, mental anguish and anxiety.

The suit does not name the radio station or InsideSTL Enterprises, the media company that WGNU contracted for the sports talk show, as defendants.

InsideSTL pulled the plug on Clark’s show immediately after the accusations became public and aired a lengthy apology on WGNU.

The suit, in which Pujols calls Clark’s statements “malicious, reckless and outrageous falsehoods,” seeks exemplary and punitive damages but does not mention a dollar figure.

It also seeks “general and special damages” against Clark and asks for a determination and declaration that the statements made  by Clark are false.

Pujols intends to donate any monetary damages from the suit to charity.