Metallica: Metallica Through the Never 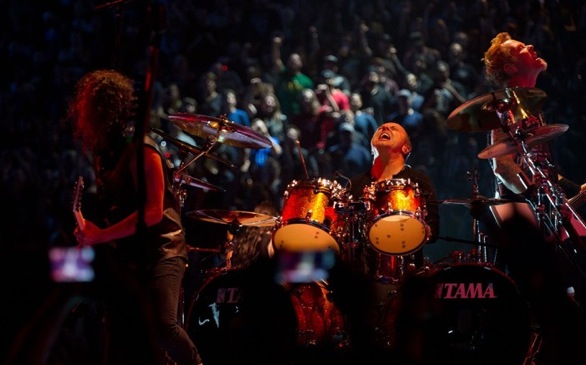 Kirk Hammett and Lars Ulrich during the filming of Metallica Through The Never.
(Credit: throughthenevermovie.com)

Metallica is one of the biggest metal bands but also one of the most popular bands of any genre.

This year, band members put their creativity into film, issuing the IMAX feature-length movie, Metallica Through the Never, a part-concert show and partially a gory, surreal thriller. Coinciding with the cinematic release, Metallica fans also get a primal, 2-CD live soundtrack, recorded during last year’s tour with 16 tracks culled from the group’s multi-decade history: a superlative sampling of classics and favorites.

Metallica storms through older tunes such as “Hit the Lights” (from 1983 debut, Kill ‘Em All) to newer material (“Cyanide,” found on 2008’s Death Magnetic). Some songs were done better on 1993’s Live Shit: Binge & Purge, and there are some regrettable problems where music and movie collide, including film-related “glitches” that appear during “Enter Sandman” and “Ride the Lightning.” Fortunately, most of the 100 minutes is pure, undiluted Metallica, with treats such as the complex “…And Justice for All,” the thrashing “Master of Puppets” and the prog-rock-tinted closing instrumental, “Orion.”