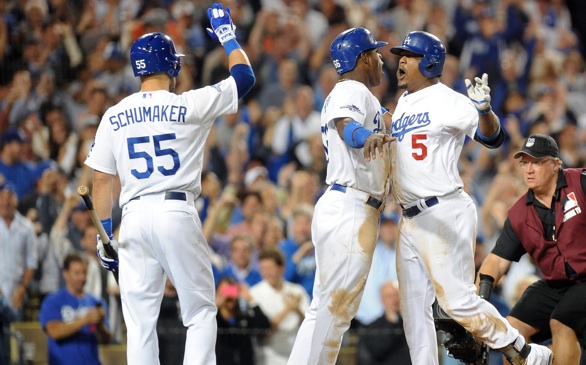 Juan Uribe is congratulated after hitting a two-run homer against the Braves in the 8th inning.
(Credit: Wally Skalij/Los Angeles Times/MCT)

The Dodgers need to watch that seventh inning.

In the by-the-numbers book late-inning baseball has become, the Dodgers have Brian Wilson to take care of the eighth inning and closer Kenley Jansen for the ninth.

That's the script, and the Dodgers don't divert from the script.

Getting to those two? Well, that's been the problem.

The Dodgers counted on Ronald Belisario on Monday night and he looked like a culprit until a two-run eighth-inning home run by Juan Uribe bailed him out in 4-3 win that sent the Dodgers to the National League Championship Series.

The Dodgers will open the championship series Friday, either at home against the Pittsburgh Pirates or at St. Louis against the Cardinals.

That's four days to figure out how to get past that seventh inning, either with starting pitching or a more effective bullpen patchwork.

Starter Clayton Kershaw, pitching on short rest, got the Dodgers through six innings. He gave up just two unearned runs, but was matched by Braves journeyman Freddy Garcia.

That wasn't in the script. The score was tied, 2-2, when Kershaw exited.

Manager Don Mattingly acknowledged that the seventh inning "has been that inning for us," but said that extending Kershaw further than the 91 pitches he threw "would not have been the right thing to do."

Mattingly said Kershaw, if asked, would not have chosen to come out after six innings, so the Dodgers went with Belisario as the bridge to the late-inning guys.

The right-hander faced three batters and got one out, inducing Chris Johnson to bounce back to him leading off the inning.

Elliot Johnson, the second batter, was 0 for 12 in the series when the switch-hitter stepped in against Belisario.

He was quickly one for 13. Johnson turned on an inside pitch and lined it over the outstretched glove of first baseman Adrian Gonzalez and down the right-field line.

Yasiel Puig tried to cut the ball off with something that looked like a hockey kick save, but the ball slid underneath and by him for a triple.

That brought on pinch-hitter Jose Constanza, who knocked a single into center field to score Johnson and put the Braves in front, 3-2.

Belisario was finished, but not before he fired one more throw: a fastball that sent his glove whizzing past a Gatorade bucket and into the back wall of the Dodgers dugout.

Left-hander J.P. Howell got the Dodgers out of the inning without further damage.

The seventh inning was also the Dodgers' undoing in the Braves' 4-3 win in Game 2.

In that one, right-hander Chris Withrow started the inning with the score tied, 2-2, and the Braves had runners on second and third with two outs when Mattingly called for left-hander Paco Rodriguez.

The Braves countered with Reed Johnson, whose .244 batting average and 11 runs batted in doesn't qualify him as a feared hitter. However, the fact that Johnson is a right-handed hitter was enough for Mattingly to elect to walk him intentionally.

The walk brought on lead-off batter Jason Heyward and the left-hander vs. left-hander matchup Mattingly favored.

One problem: Heyward hits left-handers well — actually, better than Reed Johnson — and that's exactly what he did, lining a single up the middle that drove in two runs, including the game-winner.

Of course, that failing and Monday's are now all just a bump on the road to the championship series.

"They're not shabby in the bullpen," Braves Manager Fredi Gonzalez said afterward. "They bring some guys that have pretty good arms and they'll match up with your lefties, left-righties."

He added that Wilson "has strengthened that bullpen since the last time we saw them."

Wilson struck out two in his eighth inning and was the winning pitcher.

Jansen struck out the side in the ninth.

Now if getting to them were only easier.