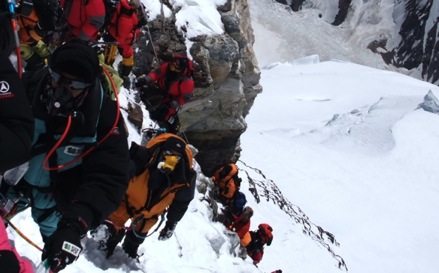 In the documentary The Summit, viewers will get an inside look into the world of mountain climbing as director Nick Ryan tells the story of a international group of climbers that experienced death, injury and loss while climbing K2 (aka Savage Mountain) in the northwestern Himalayan Mountain Range of August 2008.

Using interviews, archival footage from 2008, and recreational and aerial footage of K2, The Summit takes audiences through a chilling, realistic step-by-step description of what took place five years ago when 22 climbers from around the world decided to tackle the murderous mountain (which has a terrifying record of killing one in four climbers). Forty-eight hours after they began the climb, 11 of them had been killed or they simply vanished. One of those climbers was Ger McDonnell.

McDonnell was the first Irishman to summit K2. Although the documentary does a great job detailing the course of events that took place, The Summit’s main focus is on McDonnell.

After he reached the summit, McDonnell began his descent from the mountain. That's when he mysteriously vanished. McDonnel’s team leader had left him behind, and his best friend, Pemba Sherpa, searched in vain to find him -- what had happened to him? McDonnell's final moments have been called into question, and it turns out he was faced with a heart-breaking dilemma: during the descent, he found three climbers tangled up in ropes. Instead of sticking to the “climber’s code” and saving himself, McDonnell stuck around in an attempt to save the three climbers.

Being both an interesting and heartbreaking film, it’s not a surprise that The Summit was the official selection of the 2013 Sundance Film Festival in the World Cinema Documentary Competition. There are real, brutal photographs of a couple of climbers who died in an avalanche on K2. In addition, there are tear-jerking interviews of the spouses who lost their loved ones during the descent.

Although archival footage is used in the film, there are also actors and reenactments. What would have been nice (and extremely helpful) is if there were more indications of what was real footage and what was a reenactment. Obviously, you can tell that the footage of inside the tents and of McDonnell was real; however, it’s hard to discern what footage was real or not on the actual mountain, outside of the tents.

Still, The Summit is a must-see film, especially for those who don’t understand why these climbers do what they do. Certainly, the film might not answer all questions one might have, such as: why is mountain climbing so important that some people are willing to risk their lives? Is it worth it?

Ryan stated in a prepared statement, “Whilst the film portrays tragic events, it is also a film about survival. There are many reasons why climbers make the choices they do. I don’t think it as simple and straightforward as many first imagine.”

Whether or not you agree with these climbers’ choices, you can’t help but have respect for individuals like Ger McDonnell and Pemba Sherpa.

The Summit is currently playing in select theaters. It releases nationwide on Friday, Oct. 11, 2013.