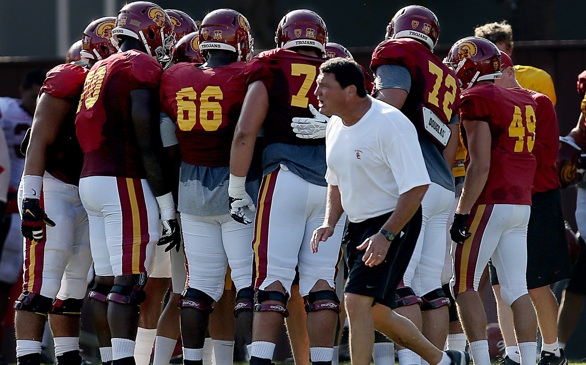 Ed Orgeron is known as the yeller of the USC coaching staff. Or the guy who ripped off his shirt during a team meeting at Ole Miss. Or in a lesser-known story, the guy who punched a dry-erase board that happened to be near the head of a fellow assistant coach almost 15 years ago.

But since Orgeron was appointed USC interim coach last week after Lane Kiffin was fired, a different Orgeron emerged. He is calmer, looser and perfectly attuned to the needs of the players.

The level of enthusiasm inside the USC program is noticeably higher the past 10 days and Orgeron’s matured into someone who can lead a program.

“I’ve changed since I was (head coach) at Ole Miss,” Orgeron said. “I’m not trying to do control everything anymore.”

Orgeron still yells during practices but he is humbler and sees the big picture. He refused to move into Kiffin’s office in the McKay Center. He is not attending offensive staff meetings and imposing his will, but meets with offensive coordinator Clay Helton in the morning to go over things.

He is still letting defensive coordinator Clancy Pendergast run the defense and remains focused on the defensive line.

The stakes are high: This is Orgeron’s audition on the national stage. It is unlikely athletic director Pat Haden will appoint him as USC coach after the season. But if the Trojans (3-2) are successful, he could parlay this into a head-coaching position at another college.

“This is my shot,” Orgeron said. “One of the things after my previous head-coaching stint, I said, you know what, if I get my chance again, I have to do it the way I want to do it.”

Whatever happens, USC players love the change. They don’t want to criticize Kiffin but their comments about Orgeron are telling.

It should not be interpreted as players being allowed to run the ship. Orgeron made them return to a team huddle Sunday and yelled about being unified and focused. But instead of fixating on that moment, he quickly returned to his good-natured self when he met with the media a few minutes later.

Orgeron’s press conferences are humorous and casual, a contrast to Kiffin. He quickly opened practices to the media.

“I think it’s good for the team, it’s good for USC,” Orgeron said. “I like the exposure , it’s part of USC, part of what Coach Carroll built with us.”

Practices are aggressive and lively.

“We just weren’t out there going through the motions,” Orgeron said after his first practice as head coach. “Football is there to be fun.”

Orgeron is big on team unity. He stopped making quarterbacks wear yellow jerseys during practices, which made them different than their teammates.

The week before Kiffin was fired, he and USC officials highlighted scholarship reductions and injuries as reasons for the Trojans’ downfall. Orgeron refused to use it as an excuse.

The big question is whether all of these apparent improvements will translate to a better performance on the field Thursday night at the Coliseum against Arizona?

Here’s what might change: Under Kiffin, there tended to be a leadership vacuum especially during moments of adversity. The Trojans often folded during tough moments, which might be illustrated by Kiffin’s 0-12 record as a head coach when his team’s trailed by seven-or-more points in the second half of games.

But Orgeron is able to lead and inspire players. Kiffin did not even see one of Arizona State’s touchdowns because he was talking to the tight ends on the bench. It is doubtful Orgeron will ever lose sight of the game or allow the team to be split into offense and defense.

This is the right time for Orgeron to lead USC. He has been an assistant coach for three coaches (Paul Hackett, Carroll, Kiffin) and knows the football program better than anyone. His colorful past is now endearing instead of abrasive.

No one cares more about playing with enthusiasm and bringing back to excitement of the Carroll era. Orgeron might be able to do it. And if he does, he might be a hot coaching commodity after the season.