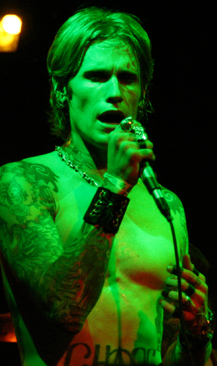 Untitled Document If rock is dead, somebody forgot to tell Buckcherry. After having disappeared for several years, Buckcherry has finally made a full-force comeback and are again rocking L.A. like it’s 1985. The band’s punk rock sensibility and groovy blues-inspired melodies are reminiscent of the sleazy arena rock of yesteryear while maintaining a relevant, modern edge.

Shirtless frontman Josh Todd thrashed about on stage exuding so much Iggy Pop energy it was nearly impossible not to dance and sing along. His huge Steven Tyler lips screamed out every chorus with almost painful enthusiasm. The rest of the band, all recently added members except for guitarist Keith Nelson, kept up with Todd with fast-paced, impressive musicianship and stage presence.

Buckcherry’s set, which went well past midnight, included about as many new songs as it did older favorites. Considering that its most recent album Fifteen hasn’t even been released in the States, the crowd seemed quite familiar with – and fond of – the new songs.

The obligatory "Lit Up," which first got the band noticed in 1999 with its unforgettable, repetitive chorus of "I love the cocaine" didn’t come until the very end of the set. It was followed by an impromptu chanting of "Co-caine, co-caine," which would make most audiences nervous, but not this one.

Highlights of the night included the soulful "Baby," "For the Movies," and the encore of "Crushed" – all songs from the band’s debut, self-titled album. Though the bands newest songs have the same high energy and playfully sleazy attitude, there isn’t as much of that special something that most of the older songs had. For a live show, however, the most aggressive and in-your-face tunes were sure to please. Though a ballad or two would have given singer Todd a chance to show off his surprisingly versatile voice, the set was strong overall.

The night belonged to Buckcherry. Buckcherry’s niche market of cult-like worshippers of old fashioned rock is a devoted one. Buckcherry reminds us of a time when tattooed rockers in ripped jeans cruised Sunset on their Harleys, a time when sex, drugs and rock ‘n’ roll prevailed.
Article posted on 1/10/2006
This article has been viewed 1965 times.