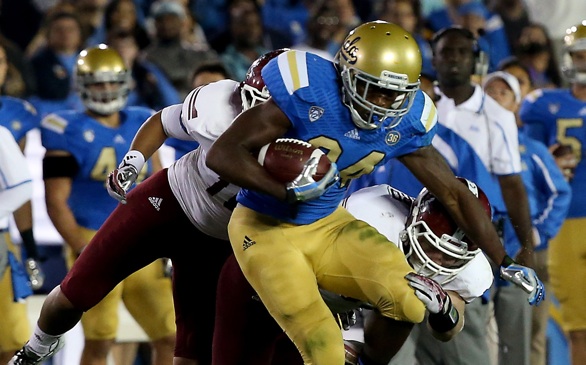 Starting tailback Jordon James — then the nation’s fifth-leading rusher — had hobbled off the field in a boot shortly before halftime at Utah. Perkins moved up the depth chart, and spent every TV timeout, every break in action chatting with Hundley.

The pair had spent six games in the same backfield at Chandler (Ariz.) High. Last week’s visit to Salt Lake City of reminded Perkins of those prep days.

With James (ankle) still doubtful for UCLA’s 7:30 p.m. kickoff against Cal this Saturday, Perkins is expected to make his first career start in front of a sold-out Rose Bowl.

Fans need not worry. The redshirt freshman filled in seamlessly during the Bruins’ 34-27 win at Rice-Eccles Stadium, turning his 16 touches into 92 yards — 66 in the second half. He hit his holes hard and dragged would-be tacklers for extra gains. He lost a yard on one carry, the first time all season he ended a play behind the line of scrimmage.

“I think it’s just getting my confidence up more,” Perkins said. “Realizing that I can play college football, that I’m supposed to be here.”

As for James, Perkins is just hoping his friend gets healthy soon. The pair roomed together over the summer, and still do so at the team hotel the night before games. They get along great, but there is one point of contention: Perkins prefers SpongeBob and Scooby-Doo, while James leans toward MTV and BET.

“He doesn’t like cartoons,” Perkins said. “I’m still a kid. … We always get in an argument about the TV.”

After losing sophomore tackle Torian White to a broken ankle, UCLA (4-0, 1-0 Pac-12) will likely start both freshmen Alex Redmond and Caleb Benenoch on the right side of the line. Assistant coaches have had, err, colorful ways of describing the duo’s inexperience.

Offensive line coach Adrian Klemm dropped his own gem of a quote last week: “You’ve got two kids who a couple of months ago were trading Pokemon cards in high school.”

Between the first and second quarters of UCLA’s game against Cal (1-4, 0-2 Pac-12), the Rose Bowl press box will officially become the Terry Donahue Pavilion.

As a 195-pound defensive lineman, Donahue was part of the UCLA team that upset USC before knocking off top-ranked Michigan State in the 1966 Rose Bowl.