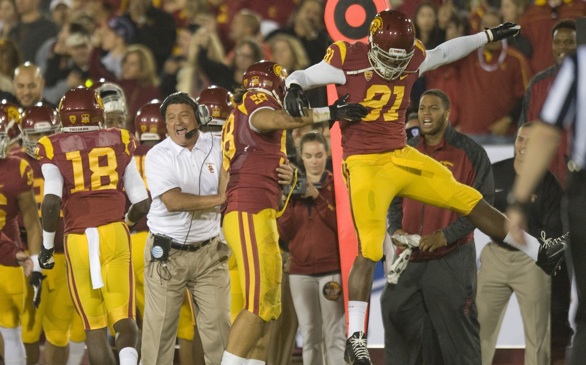 The desserts that returned as part of training table fare were scrumptious.

The whooping and hollering during a player-coached scrimmage proved cathartic.

And a movie screening the night before the game relaxed a USC team about to play its first game under interim Coach Ed Orgeron.

But how would USC respond when it finally played a game without the fired Lane Kiffin?

On Thursday night, the Trojans answered with a 38-31 victory over stubborn Arizona at the Coliseum.

With the animated Orgeron leading the way, and offensive coordinator Clay Helton calling plays for the first time, the Trojans improved to 4-2 overall and 1-2 in Pac-12 Conference play heading into their next game at Notre Dame.

“I had a blast,” Orgeron said. “I think I woke up happy for the first time in my life [Thursday] morning, besides the day I married my wife and had my kids.

“I’m not a happy guy, but today I was happy. Just a feeling of happiness of being able to represent USC.”

Quarterback Cody Kessler passed for two touchdowns, receiver Nelson Agholor broke out, and three tailbacks scored touchdowns as the Trojans bounced back from their 62-41 defeat at Arizona State that marked the tipping point in Athletic Director Pat Haden's decision to fire Kiffin.

“Coach O was awesome,” Haden said. “An entirely different energy for our team.

“It was just fun watching our kids having a blast. The game is supposed to be a game of joy and they played with joy tonight.”

In the days leading up to the game, Orgeron had repeatedly implored his team to “play with attitude.”

Orgeron displayed plenty as soon as the Trojans got off their buses, pumping his fists and exhorting fans to cheer as he led players through the customary “Trojan walk” to the stadium.

Helton, who last called plays at Memphis in 2009, was decidedly more low-key.

Gripping a play sheet that dwarfed the one that became Kiffin's trademark, Helton mixed runs with play-action passes that enabled receivers and running backs to find open space throughout the game.

“I didn’t have to say a word on the headsets,” Orgeron said, “except ‘Attaboy!’”

With All-American receiver Marqise Lee sidelined because of a knee injury, Agholor caught seven passes for 161 yards, including a 62-yard touchdown that gave the Trojans the early lead.

Tailbacks Tre Madden, Silas Redd, Justin Davis, Javorius Allen and Ty Isaac helped the Trojans rush for 249 yards, and Kessler added a 34-yard scramble for good measure. Redd, making his season debut, rushed for a team-high 80 yards in 19 carries and carried the load in the final minutes to run out the clock.

Madden scored on a 63-yard pass play in the first quarter but suffered a hamstring injury later in the game, giving others opportunities.

Kessler completed 15 of 30 passes for 297 yards, without an interception, as the Trojans amassed 546 yards.

“It was awesome,” Kessler said as he left the field. “It was great to come out and make a statement. I think people are excited about USC football again.”

USC's defense, which got torched for 612 yards in the Trojans' 62-41 loss at Arizona State, gave up 508 yards against the Wildcats, who took advantage of the Trojans secondary to make it a game with two fourth-quarter touchdowns.

“We did our job up to the fourth quarter,” safety Su’a Cravens said. “Then we kind of fell asleep.”

USC extended a 28-10 halftime lead to a 21-point margin early in the third quarter, before Arizona started to come back.

Quarterback B.J. Denker connected with receiver Garic Wharton for a 45-yard touchdown pass that pulled the Wildcats to within two touchdowns with just over four minutes left in the quarter.

The Trojans answered with a 73-yard drive that Allen capped with a four-yard touchdown early in the fourth quarter for a 38-17 lead.

Arizona added another touchdown on Denker's nine-yard touchdown pass to receiver David Richards and pulled to within 38-31 on Denker's 28-yard pass to Wharton with less than five minutes remaining.

But Helton repeatedly called on Redd in the final minutes, preventing Denker from getting another opportunity.

“Everyone knew they were going to run the ball,” said Arizona Coach Rich Rodriguez, whose team fell to 3-2 overall and 0-2 in the Pac-12. “They were running to the short side with great success all game.

“We didn’t get off the blocks and we didn’t tackle.”

Denker, who played at North Torrance High and Cerritos College, completed 28 of 44 passes for 363 yards and four touchdowns.

USC outgained Arizona, 315 yards to 257, in the first half and took a 28-10 lead on Kessler's touchdown passes to Agholor and Madden and touchdown runs by Davis and Allen.

The Trojans went three and out on the first series, but they wasted no time striking once they got the ball back.

Kessler faked a handoff to Madden, dropped back and connected with Agholor deep over the middle for a touchdown.

On USC’s next series, the offensive line gave Kessler plenty of time to find Madden circling out of the backfield on a second-and-16 play. Madden caught the pass, broke a tackle and sprinted toward the end zone. He almost was brought down inside the five, but extended the ball over the goal line to complete a 63-yard scoring play for a 14-0 lead.

Now, it’s on to Notre Dame.

“It’s a fun place to play,” senior offensive lineman Kevin Graf said, “and we’re all excited to get over there.”