This Is the End, The Heat & 'American Horror Story' 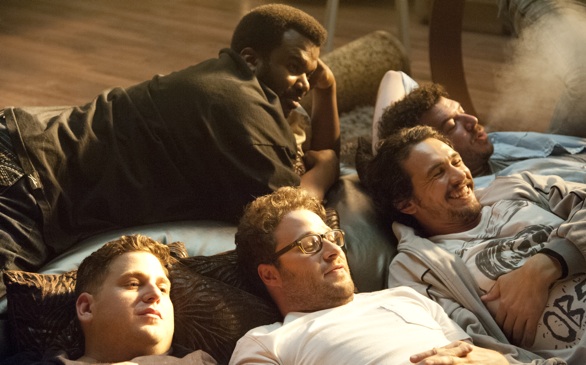 This Is the End is a hilarious comedy you can't help but laugh while watching.
(Credit: Suzanne Hanover)

The Majors: The only indication that The Heat is actually a 2013 release is the presence of Melissa McCarthy, who stars along with Sandra Bullock in a cop buddy comedy directed by Paul Feig (Feig also guided McCarthy to an Oscar nomination for Bridesmaids) Without McCarthy as the co-lead along with Bullock, it would be quite easy to conclude that this film was made in 1995, not 18 years later. It is a testament to Bullock that she still fits easily into the type of comedies that she could have done nearly two decades ago, but that just means that Bullock hasn't aged. This type of film has. The Heat is still an agreeable entertainment, since there are few stars as endlessly charming as Bullock and as naturally funny as McCarthy, but there's essentially nothing memorable about the film. This is a mostly tepid follow-up to Bridesmaids that achieved similar box office success but almost certainly will not be remembered as fondly, if remembered at all.

The Heat was not the only film this summer that seemed a throwback to 1990s cinema. But whatever its faults, The Heat is far better than the terrible R.I.P.D., an action comedy reminiscent of Men in Black but without even the charm of its creaky sequels. This was one of the biggest failures of the summer's films, and rightfully so. Director Robert Schwentke, who made the surprisingly clever action-comedy Red, has far less success with R.I.P.D. While Jeff Bridges can play the grizzled mentor role in his sleep, Ryan Reynolds once again proves himself to be inadequate as a movie star in his own right. His cover-friendly looks and frat boy charm make him a perfect romantic foil for bigger stars, but as a leading man, he once again feels insufficient, even when paired with a veteran like Bridges.

It is only natural to wonder whether the budget for pot was factored into the budget for This is the End, and if so, whether this caused the film to cost more than Avatar. A lackadaisical comedy about the end of the world, the film features most of the Judd Apatow stable of stoner actors playing themselves. These include James Franco, who once again skids ever closer to self-parody, Jonah Hill, Michael Cera, and the film's co-writer, Seth Rogan. Emma Watson also appears, and along with The Bling Ring and The Perks of Being a Wallflower, shows increasing range as an actress after Harry Potter. Although the audience may have a sense that the actors are doing the film more for their pleasure than the audience, the film still leaves enough of that pleasure for viewers. This is the End might be self-indulgent, but it's difficult not to have a good time when its actors clearly are.

The Idiot Box: Adopting a miniseries format was clearly a brilliant move for "American Horror Story," which returned for a second season with a mostly new cast and a premise completely different from its first season. This time set in a New England insane asylum in the 1960s, the series often seems as crazed as its inmates. What other series would incorporate an Ed Gein-style serial killer, alien abductions, Nazi experimentation, demonically possessed nuns and musical sequences? Like most Ryan Murphy series, "American Horror Story: Asylum" is an imperfect entertainment with the occasional lapse in tone and even decency. However, taken as a whole, this is one of last year's best series. Jessica Lange once again anchors the show with one of her finest performances, reminiscent of her career-best work in Frances, but the true leads are Sarah Paulson and Evan Peters as patients wrongfully imprisoned in the asylum. This is a show that dares to have a subplot that suggests that Anne Frank survived the Holocaust, and it actually makes it work.

"Downton Abbey": Seasons 1-3 gets an American release on DVD in preparation for the fourth season premiere in America this winter. Only the first season is essential viewing, thanks to tighter plotting and fewer unsuccessful subplots, but even when the show fails to be great art (in the manner of Gosford Park, by creator Julian Fellowes), it is usually good entertainment – a high-toned soap opera with better costumes and accents. Despite the democratic focus on both the aristocratic family and their servants, the aristocracy usually prevails in terms of viewer interest thanks to Maggie Smith, who has been honing her role as a curmudgeonly aristocrat for 30 years. No living actor can do as much with a one-liner as Smith, and here she makes even the dullest lines sound like poetry.