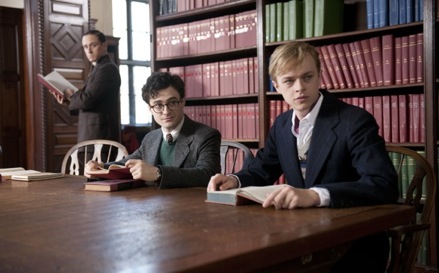 Allen Ginsberg. William S. Burroughs. Jack Kerouac. You might recognize these names as those of poets who defined the Beat Generation, a culture that rallied against rigid literary standards of poetry.

However, how much do you know about these guys prior to when they became icons, when they were just young students at Columbia University?

Kill Your Darlings tells audiences the untold story of a young Ginsberg (Daniel Radcliffe) and his friends Lucien Carr (Dane DeHaan), Kerouac (Jack Huston) and Burroughs (Ben Foster). When they were students at Columbia, these four young men bonded over their love of poetry and their goal to shake things up. But when Lucien’s older, homosexual male friend David Kammerer (Michael C. Hall) falls in love with him, things end tragically and Allen is forced to realize the kind of man his best friend, Lucien, really is.

Q: What really resonated with you when you read the script?
Dane DeHaan: Lucien Carr was entirely a surprise. I didn't really know that he existed, and I didn't know that this story actually happened. He has this kind of charisma and extroverted quality to him. It's different from work I've done in the past, but [he’s] still a really complicated individual. He just seems like a really hard person to wrap my mind around, and that's kind of what attracted me to him.

Daniel Radcliffe: By reading Allen's diaries when he was a teenager (and that combined with the character I saw in the script), I found him very likable immediately. He seemed by all accounts…to have been very kind, warm and very good company. The diaries reveal him, as does the film, to be this really interesting mix of somebody who had immense confidence and intellect and rich inner light…he was still quite reserved and shy as a young man. I think that's a really interesting split in a personality…

Michael C. Hall: I was aware of this story, and I went through my period of fascination with the Beats…And I was excited more specifically about the opportunity to humanize and sympathize this guy [David Kammerer] who's sort of a footnote in a lot of accounts of formative years of the Beat generation and, if anything, was characterized as a bit of a two-dimensional villain, stalker. I liked that the movie seemed to aspire to round him out a bit.

Q: Has your point of view changed from being a kid’s actor to now?
DR: Yeah, since finishing Potter it’s been a huge journey for me. I've never worked with different crews before, different groups of actors before. The Woman in Black was filmed in England. If you've done a Harry Potter film you're never going to work again in England without knowing somebody on the crew because you know so many people. So, actually doing Kill Your Darlings was a huge thing for me because it meant I'm not going to be working with anybody I knew, and you have to find out who you are again on a film set. It felt like starting fresh in a way. Working with John Krokidas, our director, he did introduce me to unique ways of working that I’ve never really been shown before…I don't know at what point exactly, but I think from doing “How To Succeed” (the musical) and through Kill Your Darlings, that was a big period of transition for me in terms of work.

Q: When you were younger, did you have antsy writing and thoughts that you put down that reflected this kind of feeling that these Beats wrote about? Why do you think there is such staying power with these guys?
MCH: I think we're still feeling the ripple effects of the cultural phenomenon or revolution that they perhaps started...

I definitely have some journal entries that characterize -- ultimately they're run-on sentences.

DR: I definitely have my fair share of real bad poetry. I wrote when I was about 17 or 18.

In terms of the Beats, there's something about the way they did what they did…My English teacher used to say something that I think really applies to the Beats: There are two types of poets. There are people who write poetically about their life and people who live poetically and write about it.

I think [the Beats’] effect on today's society is kind of amazing; it's not just that their books are still celebrated and read. But also, they were they original hipsters. Where I live in Williamsburg, Brooklyn, I can't walk down the street without seeing 10 people dressed exactly like Jack Kareouc. It's really insane. So, obviously their books had this huge impact, but what they stood for, how they dressed -- all that stuff still resonates today.

Q: Please say you all saved your bad poems, and they're all going to be on DVD.
DR: Some of mine were, actually. I had the stupidity to have them published under a fake name when I was, like 17. They're out there...don't look them up.

Q: You will at least tell us your pen name.
DR: (laughs). No, I'm not going to make it that easy.

Q: Is there any difference between playing people who are in that period versus playing people who are modern?
DD: Yeah, sure. Absolutely. It's not a terribly conscious effort, but I think they certainly spoke differently. The script does a really good job of capturing the characters' individual voices and also emulating the way people talk in the '40s and just having an awareness of what's going on around you and the politics of the time. These were people that if they expressed how they truly felt about some things, they would be criminalized and they would go to jail. So, that obviously has a deep impact on how you act with those around you. Just having that awareness affects what you're doing.

DR: The one example that I can think of as well that speaks to that is just the moment before Dane and I kiss in the park. You have to have an awareness. Not only is it a big moment because he wants to kiss him for the first time, but also he does have to check around to see if anyone is there.

MCH: I would agree with all of that, especially the job that our wardrobe people did. And the script is so well-rendered that a lot of it could be unconscious, like Dane said.

Kill Your Darlings releases in theaters in Los Angeles and New York on Oct. 16, 2013.