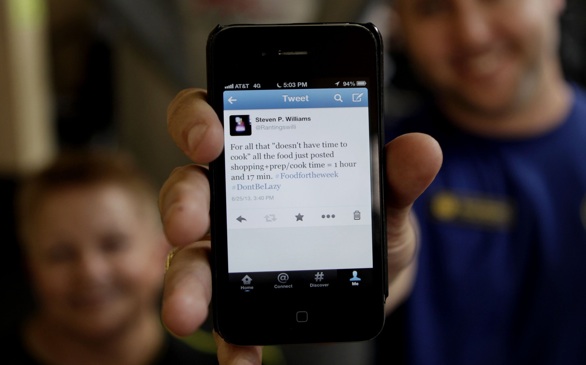 Should we still be careful when it comes to posting on social media?
(Credit: Sarah Hoffman/Dallas Morning News/MCT)

To the teenagers who plaster their boredom, distaste for physics and bodily yearnings all over the Internet while still hoping to get into a good college, here's a cheerful message:

Admissions officers don't Google you, hunt you down on Twitter, or hack your settings on Facebook - usually.

Fewer than 1 in 3 admissions officers say they check students' social media postings or Google them when evaluating applications, according to a forthcoming 2013 survey from Kaplan, the test prep company.

That's up from 1 in 5 in 2011, but admissions officers are still sufficiently appalled at the idea of invading the privacy of prospective students that any audacious posts are still somewhat shielded.

"That's their private space," said Richard Shaw, dean of admissions at Stanford University. "I just think it's the wrong thing to do.

"Imagine if we could remove ourselves to an age when people wrote wonderful letters back and forth. We wouldn't be searching through that. So I think it's wrong to do just because it's there."

Many admissions officers agreed. But applicants who still feel it's risky to trust in the moral rectitude of college officials may take comfort in the sheer impracticality of Googling everyone.

Too many to Google

To wit: UC Berkeley received 83,690 freshmen and transfer applications last year and admitted 18,074. The latter is less than a quarter of the former, but both are still in the five figures.

What about Googling just some?

"That would be a problem, too," said Rita Kasperek of the Cal admissions office. "We want to make sure the process has integrity."

Even at tiny Harvey Mudd, the private science and math college in the prestigious Claremont Colleges in Southern California, admissions officers would have to check out more than 3,000 applicants.

"I don't want to do that," said Peter Osgood, director of admissions. "I could chase my tail for a long number of hours."

Suppose an applicant asked the college to look at a link - say, the student plays a jaw-dropping rendition of Prokofiev's Piano Concerto No. 3 on YouTube - "I might - if I had time," Osgood said. "But mostly I don't."

That's good news for students whose online presence is the opposite of playing Prokofiev: "o god i cnat let Harvard see dat cover photo o me at a rave tryign heroin 4 the first time! why i do dat!/! gota cange mi name!" tweets "Sara" with her photo.

More unblushing posts from the precollegiate set are found using the hashtag #highschool. Like the one from "Victoria," who tweets that "physics will be the death of me." Or "Diego," tweeting how #bored he is. Or "Emma," whose boy-teasing tweet offers an explicit invitation.

Others come from community college students like "King," who may wish to transfer to a university someday. He tweets a selfie at City College of San Francisco "in class w/my feet up like f*** it" then posts it all to Instagram.

Caution on the Web

Yet some students are so cautious that they won't even follow the Facebook page of a college they care about because it could let the college see their information, said Luis Lecanda, assistant director of admissions at Santa Clara University.

One 18-year-old from Lowell High in San Francisco wouldn't even let her name be published in this story lest one of the colleges she's applying to see she's discussing this subject.

"Getting into college is very competitive - it's like running for president," she said. "You have to cover up and clean up your reputation and background. I have friends who go out on the weekends and put up a foggy picture (online) so it's obvious they're under the influence. I feel like (they) are either unaware that colleges do look them up, or they're too confident."

At Pomona, another of the Claremont Colleges, looking up students is not a formal part of the admissions process.

Yet, "I wouldn't say we would never do it," said Will Torres, assistant dean of admissions. "I'm sure some folks do. Young people are wise to be vigilant about their online presence."

Of the 422 admissions officers surveyed by Kaplan this year, 122 - or 29 percent - said they have conducted an online search of an applicant. Slightly more, 131, said they have visited an applicant's social networking page. Of those, 39 found something that negatively impacted the application.

The survey has a 4 percent margin of error, but it's enough to encourage Alan Katzman of New York. He recently opened a company called Social Assurity to help students "uncover questionable content and clean that up," he said.

An attorney and former investigations executive, Katzman started the service in part because he saw the postings of his own college-age kids - "the camera starts flying when alcohol is involved" - and because he disagreed with the common wisdom on the subject.

"Everyone was saying to make sure you lock down your social media," he said. "But locking down is really bad advice - if I'm looking and there's nothing to find, I'm going to think the person has something to hide."

Other methods to check

So Katzman also helps students enhance their Web presence - like making sure that kids who play Prokofiev have a YouTube video - "so those attributes will be represented online," he said.

Last year, California passed a law prohibiting colleges from requiring students to provide social media information. Lawmakers were motivated by colleges in other states, including two Kentucky universities where student athletes have to let officials monitor them online.

California colleges use other methods to check on students.

Throughout the University of California, for example, with 164,000 applications a year, up to 10 percent are randomly chosen for verification - and about 30 applications a year are canceled after applicants are asked to provide evidence of claimed achievements.

"We want the student to provide us with that information," said Han Mi Yoon-Wu, manager of admissions. "We don't have the bandwidth to use social media in that fashion."

Nor would it be reliable if they did, said Dianne Klein, a UC spokeswoman. "Anybody can put anything up on the Web."