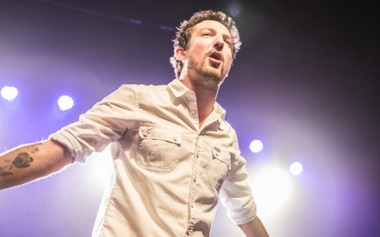 Monday night, the Fonda Theater in Hollywood was filled with couples on dates and 20-somethings dancing in the aisles. It was a full house, and everyone joined in the singing and dancing throughout the night.

Frank Turner & the Sleeping Souls have been touring in support of their new album Tape Deck Heart. Early in the set, Turner apologized with, “I have not developed a Springsteen complex! I would be playing the guitar, but I injured my back early this year right before tour. My doctor wanted me to reschedule the tour, but instead we hired this guy!” Turner then pointed out his new guitar player, the only Irishman in a band of Englishmen. He exchanged a few jokes with the audience and went back to singing the punk-folk-rock love songs from the newest album.

Before playing "Polaroid Picture," the band dedicated it to a little 7-year-old boy they met before the show. It was his first concert, and he was very excited to be there. The song, while beautiful, is about the passage of time and the loss of childhood innocence. It was quite appropriate for the dedication, but at the same time, it was a slightly sad song to choose. Turner joked about that irony but kept up with the song.
He demanded audience participation, and the dancing, clapping and singing turned the audience into a choir.

Turner also made comparisons of Los Angeles to other countries that he and the band had visited, and he challenged us to a dance-off with them. Personally, I think everyone did well! The venue was nearly quaking under the pressure of all of the excited dancers and singers.

With songs that are like personal narratives, often about relationships, listening to Turner's lyrics almost feels like hearing a bit of a journal entry from a writer. While the songs are lyrically sad, they also have an upbeat and punky-folk party feel to them. There is something for everyone.