Chloë Grace Moretz on Carrie: “We Went Back to the Book” 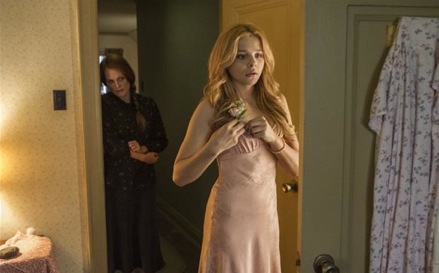 “You will know her name.” Or at least you probably do already know her name and the story, too, for that matter. It’s not the first time we’ve heard it. But it’s the first time the story of Carrie, originally told by Stephen King, has been adapted for a modern audience in the 21st century.

Despite the fact that the original film came out in 1975, and the book even before that, the story is still the same, and the message is perhaps even more relevant.

Chloë Grace Moretz kills it in her rendition of the classic character. With the ability to mask her confidence and take on the timid mannerisms of a social outcast, Moretz displays a roller coaster of emotion. Transforming from a shy and broken wallflower to a bloody, telekinetic monstrosity, she is both terrifying but also relatable.

In a recent interview with Campus Circle, Moretz elaborated on how difficult it was to take a character that everyone knows and make it her own. “My biggest thing was I’m never going to be doing this [imitates the poster from Brian DePalma’s Carrie]. I’m never going to be doing that iconic thing that she did, because it’s just too obvious. I’m going to keep my hands above my waist at all times. I’m not going to do that symbol, because everyone knows that’s the iconic Sissy Spacek. We just wanted to keep her mannerisms away from that. That way, we were able to put our own spin on it.”

Moretz said that this project was based more on King’s book than DePalma’s film. “We had the book there on set every day, and we compared the page in the script to the page in the book,” she said.

She explained that it was a real challenge to create a character that was shocking to the viewer, because Carrie is a story that many people already know. It’s such a different era for Carrie to be coming out. Instead of the shock factor that the first film had, audiences are now asking, “Can you shock us again?”

Moretz admitted that she can’t shock you like the original did; you already know what's going to happen. What she has done, however, is add her own touch to this character to make her version of Carrie someone that is deeply conflicted and truly terrifying when she eventually flies off the handle.

The film’s creators had DePalma’s blessing before they started. Director Kimberly Peirce (Boys Don't Cry) explained how she first reacted to the idea of making another Carrie. “I think it was an extraordinary opportunity when they came to me,” she said. “And I’m friends with DePalma, so I called him and asked what he thought about it, and he said, ‘You gotta do it!’”

According to the cast and crew, one of the most challenging aspects of making this film was constructing Carrie’s scene of getting covered in blood. Moretz explained, “They did something like 50, 60, 70 blood tests with one girl. Dropping the blood every day, like five times a day, trying to figure out what height, what air pressure. Do they drop it from a real bucket or do they use [something else]? What gives you the best splatter, different types of blood…?”

The proceeding scenes were all captured in the same night in order to maintain the continuity of Carrie’s blood-drenched body. The crew took painstaking efforts making sure that it looked the same throughout. It does, and the resulting image is arguably artful. The posters featuring a bloody Moretz are enough to give you nightmares.

Opposite Moretz is Julianne Moore, who plays Carrie’s fanatical and abusive mother. Her performance is fantastic; she’s absolutely wretched. It’s kind of hard to watch actually. Another standout is Judy Greer, who plays the school’s gym teacher who initially tries to help the troubled Carrie but only ends up hurting her. She portrays a very deep character with good intentions. It’s refreshing to see her in such a positive role, especially after so many flashing incidents in “Arrested Development.”

For a modern adaptation of the classic, Peirce’s Carrie is about as good as it can get. You know what’s going to happen, so there are no surprises. The most appealing part about this movie is that the filmmakers took the time to do the story justice. They stuck to the book, rather than the DePalma film, and they found a way to make it their own.

Interviews
'Crazy Rich Asians' made Henry Golding a star. Now he's showing Hollywood everything he can do
570 views

Interviews
Mary McNamara: After losing a child, 'Pieces of a Woman' filmmakers channeled their grief into art
602 views