Fast Food: Companies Supply Those who Want Their Food Fast – and Cheap 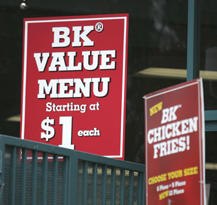 Untitled Document Friends Alan Cintas and Sean Dallura sat down at a Del Taco recently for a typical midday meal – three tacos, nachos, a cheeseburger, chili fries and a chicken quesadilla between them.

The 19-year-olds are hungry and busy, juggling classes at Saddleback College, sports and jobs. They eat fast food nearly every day. And they can recite by heart the cheap eats at most fast-food chains.

"For $3.52 at Wendy’s I can get a junior bacon cheeseburger, chicken nuggets and medium fries – then I just grab a drink at home," Dallura says.

To keep customers like Cintas and Dallura happy, some fast-food chains are creating, upgrading or tweaking value menus after years of focusing on fancier fare to compete with fast-casual restaurants, which were luring away customers with more upscale food.

Now, fast-food companies want to remind diners that they are still the best place to buy a lot of food for a little money.

Burger King is testing a value menu with several items for $1 including a Whopper Jr., chicken tenders and small fries. El Pollo Loco, introduced a dollar menu for the first time this year. And Taco Bell refocused its bargain menu in 2004 with prices ranging from 99 cents to $1.29.

Many fast-food restaurants want to appeal to a wide-range of customers with both premium and low-priced menu items.

Taco Bell, appears to have been successful in targeting different consumers with its Big Bell Value Menu and new, more expensive dishes with chicken and steak. While the demographics of the two groups of customers are generally the same – men 16 to 49 – one group is motivated by price, while others are more focused on taste, portability and convenience, said Bill Pearce, chief marketing officer of Taco Bell, which revolutionized the low-cost menu in the late 1980s with 59-cent tacos.

Most of Taco Bell’s advertising dollars promote more expensive new products such as the "chipotle grilled stuft burrito" ($2.99), which the company is advertising on television and radio. But in restaurants, the Big Bell Value Menu is prominently featured, making it easy to pick out the cheap food.

El Pollo Loco, known for its grilled chicken meals popular with families, also highlights its low-priced offerings on menu boards. The one-dollar menu has brought in new customers and contributed 20 percent of the sales growth at restaurants opened more than a year, a key measure of a restaurant company’s health, said spokeswoman Julie Weeks.

Some believe fast-food companies are dusting off low-priced menus after several years of focusing on more upscale products to stave off competition from fast-casual restaurants Panera Bread, Chipotle and others, which have grown rapidly in the past five years.

Now that fast-food chains have wooed some customers back with premium products, they want hungry young men to know they still have cheap eats, said Bob Sandelman, president of Sandelman & Associates in San Clemente, Calif., a market research firm for the restaurant industry.

Some chains try to stay out of the cost-cutting competition, however.

"We want to be about premium quality and premium prices," Haley said.

Carl’s Jr. does put big signs in its window advertising both 99-cent items, however. The signs are aimed at the one-third or so of fast-food eaters who are not brand loyal and who drive around looking for deals, Haley said.

Distributed by Knight Ridder/Tribune Information Services.
Article posted on 1/10/2006
This article has been viewed 2604 times.