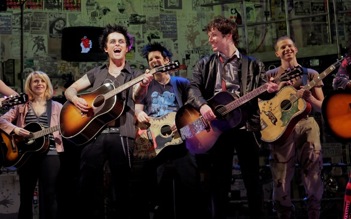 Broadway Idiot tells the story of 'America Idiot,' a musical based on Green Day's music.
(Credit: Courtesy of Broadway Idiot.)

Broadway Idiot is a documentary about “American Idiot,” a Broadway hit inspired from the music of Green Day. In the musical, three friends want to move away and experience what life has to offer outside of their hometown. As the documentary explains this musical's concept, viewers are treated with footage of cast rehearsals, the musical’s set design, Green Day’s input and even a Grammy performance.

“They’ve knocked it out of the park as they say. It’s amazing,” raves Billie Joe Armstrong, Green Day’s lead vocalist and guitarist, about "American Idiot" in the documentary.

With a great behind-the-scenes look of what it was like for the cast as they improved from the first day of practice in Berkley to their first performance on Broadway, director Doug Hamilton's Broadway Idiot encapsulates the journey of normal people becoming extraordinary as they fulfill their Broadway dreams, just as Armstrong fulfilled his dream of being a musician. Also, it shows the collaboration between people who come from completely different worlds, such as Armstrong and Michael Mayer (the musical’s director. He also did "Spring Awakening").

To give the viewer a better sense of what “American Idiot” is all about, much of the documentary discusses the musical’s themes, including old friendships, addiction, romance and finding oneself.

During the course of the musical, three friends encounter some obstacles. One guy has to stay home due to his girlfriend’s pregnancy, another copes with losing his leg while serving in the army, and the third falls in love. While these characters seem to be based on the Green Day band members, they represent new kinds of characters that anyone can relate to. Armstrong says, “I’ve never seen the cast connect to their characters in such a profound way.”

A tense part of Broadway Idiot occurs when Green Day has to approve the use of their music in the musical. When Armstrong was first approached about this idea to use his lyrics to create “American Idiot,” he was willing to offer his support as long as the band approved of how the musical would portray its music.

After weeks of rehearsal, the cast performed a musical love scene in front of Green Day. “I was floored,” Armstrong says. From then on, the band enthusiastically encouraged "American Idiot."

Armstrong doesn’t regret letting Green Day’s songs go to Broadway. Instead, he’s glad he trusted them to use his music. “I felt sort of validated as a songwriter. My melodies were validated,” he says.

Broadway Idiot dedicated a portion of the documentary detailing Armstrong's relationship to the cast and crew. He became so close to them that he invited them to perform with Green Day at the Grammy Awards. This was a special night not only because of the performance, but because the cast also found out they were going to perform on Broadway. This part in the film illustrates that dreams can come true, making the viewer appreciate the work the cast and crew have put into this production even more.

The cherry on top in Broadway Idiot is when Mayer asks Armstrong to participate in the musical as St. Jimmy, one of the characters referenced in Green Day’s album American Idiot. St. Jimmy represents people’s flaws, obstacles and struggles. Armstrong agrees to the part and says, “I never thought I’d end up doing Broadway.”

This informative, musically charged documentary proves that people who are very unlike, for example Green Day and the “American Idiot” cast and crew, can come together to create something spectacular.

Broadway Idiot opens in select L.A. theaters on Friday, Oct. 18, 2013. You can buy or rent the film on iTunes by clicking here. Check out the film's website for more information.