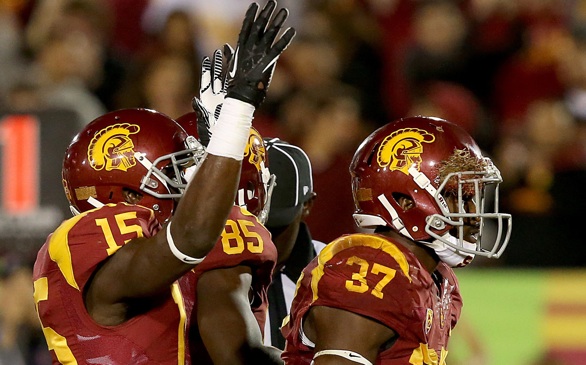 Things got stranger when Orgeron started playing catch with Lee.

“I told him catching my ball is like catching a tipped pass,” Orgeron joked.

Lee was probably more surprised when Orgeron did not offer the Trojans (4-2) a fiery, eyeball-popping assessment of Saturday’s game against Notre Dame (4-2) during his pre-practice speeches.

“This is a big rivalry game, but it’s not the all-or-nothing or the biggest game of our life,” Orgeron said.

Some of the biggest memories of USC football occurred here and this is the eighth anniversary of the Bush Push - USC’s 34-31 victory over the Irish that was attained as tailback Reggie Bush pushed quarterback Matt Leinart across the goal line.

That game was emotional as USC players damaged the visitors’ locker room at Notre Dame Stadium during their postgame celebration.

But Orgeron is more concerned about the Trojans’ 2001 trip here when former coach Pete Carroll took the team to the College Football Hall of Fame and the historic sites on the Notre Dame campus the day before the game. Even though USC was just 6-6 that year, Carroll blamed the sightseeing for a 27-16 loss to the Irish and never made another field trip here.

He was proved right because USC has won every game in Notre Dame Stadium since 2001 and Orgeron followed the plan this weekend.

“I don’t think we’ll be too high,” he said. “I was worried about that last week and it didn’t happen. We handled things well. So I think we’ll be fine.”

USC quarterback Cody Kessler will make his first start in the rivalry but said he won’t be awestruck by Touchdown Jesus, the massive mural overlooking the stadium, or what figures to be a raucous crowd.

“It’s going to be a wild atmosphere,” Kessler said. “But I’m going to be level-headed. I love road games and this is the ultimate road game. I’m confident and I’ll be under control.”

If Orgeron wins today, he will join John Robinson (1976) and Paul Hackett (1998) as the only USC coaches to defeat Notre Dame in their debut meetings. But Robinson and Hackett won those games at the Coliseum.

“I’m sure, come Saturday night, when we walk out onto the field, it’s going to mean a lot,” Orgeron said.

It could also mean a lot to recruiting. Orgeron has put his imprint on recruiting with offers to local players like Chaminade quarterback Brad Kaaya and Loyola offensive tackle Chris Brown since Kiffin was fired. He also received a commitment from Narbonne linebacker Uchenna Nwosu.

At least early, it seems like he wants to make Southern California a point of emphasis again and getting off to a 2-0 start would restore buzz to a program that’s taken plenty of hits the past year. Orgeron hinted he wants everyone to look at things fresh when he told the Trojans this was Game 2 of the season, conveniently skipping the first four games.

Not a single player objected either.

“Everyone tells me this is a big game,” freshman wide receiver Darreus Rogers said. “So I’ll treat it like that. It will probably mean more to me afterward.”

Notes: USC coach Ed Orgeron continued his feel-good tour by providing ice cream bars to the Trojans on their flight to South Bend. The players reacted with loud cheers when the team plane landed, something that is not a normal road-trip custom.